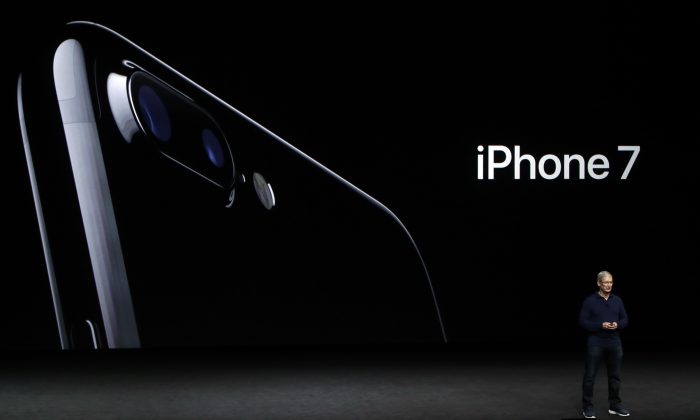 Review: The iPhone 7 Is Just Fine, Even If It Doesn’t Wow

TIBURON, Calif. (AP) — Apple’s new iPhone 7 and 7 Plus are clearly improvements on their predecessors — even if the biggest change is actually an omission (of the traditional headphone jack). But are they improved enough to justify an upgrade?

If you’re an iPhone user, it may depend on how long you’ve held onto your current iPhone. If you’re a proud owner of the iPhone 6S or its plus-sized cousin, you probably don’t need to rush out for the 7. But the 7 includes enough cumulative iPhone improvements from the past two years to tempt anyone still clinging to an older model.

For instance, the iPhone 7 is seriously water resistant; putting it under a faucet for a few minutes merely muffled the speakers and made the touch screen stop working until I dried it off. It’s got louder speakers, a brighter screen and, in the larger 7 Plus, a second camera lens — a low-powered but useful zoom. Add to that a sharper 12 megapixel camera introduced with the 6S.

All iPhone 7 models come with twice the storage as the comparable 6S, at mostly the same price. That’s “mostly” because the $769 starting price for the larger iPhone 7 Plus is $20 more than comparable past models. The regular iPhone 7 stays at $649. Both entry-level phones now have 32 gigabytes rather than 16.

Without the traditional headphone jack, wired headphones plug into the Lightning port normally used for charging. But the jack’s disappearance doesn’t present the problem you might expect, given that iPhone 7 comes with a 3-inch-long adapter for your old headphones. A replacement costs $9 if you lose it (I’ve misplaced one already in less than a week).

To charge your phone while listening, you need a $99 battery case or a third-party adapter. Neither is included. Also, your iPhone 7 headphones won’t work with any other device that uses the old-fashioned jack.

Of course, you can just go wireless, as Apple would love you to do. Its upcoming $159 AirPods are two tiny inch-and-a-half Bluetooth earpieces designed to integrate with Apple’s software. Setting them up involves little more than opening the case near your phone and tapping “Connect.”

Audio plays automatically when you’re wearing them, and pauses when you pop one out to talk to someone. Double tapping on an earpiece let me ask the Siri voice assistant to change the volume, rewind or check the weather. (They do look a little like dangling earrings when you have them in.)

The AirPods picked up my voice pretty well, even when I spoke softly, and calls sounded fine in controlled environments. Siri had some trouble when Shakira blared in the background, but that’s no different from using the phone in a loud bar. The AirPods did stay in my ears through one bike ride and eight runs, though one dropped out as I changed my shirt.

Apple promises five hours of continuous use; I got well over that, although voice calls will eat up their tiny batteries much faster. You can also double your listening by using one AirPod at a time. The AirPods come in a case that resembles a pack of dental floss; it also recharges the earpieces, extending usage to 24 hours. The Lightning charging cord for your phone can recharge the case, too.

But the AirPods still seem remarkably easy to lose. The case helps, but I also lose dental floss regularly. I also get careless with wired headphones; I’ve even run a pair through the wash, which was no big deal since they cost just $29. Of course, you might be more careful with $160 accessories. Apple does plan to sell single earpieces and the case separately, but hasn’t announced prices.

The wired headphones that come with the 7 work just fine — and will still cost $30 to replace. Apple isn’t promising better sound — at least for now — despite the Lightning port’s ability to deliver audio digitally. But third-party headsets might be able to offer advanced features such as noise cancellation without needing a separate battery.

AirPods will work with older iPhones once they get the free iOS 10 software upgrade. Connect them once, and they’ll work on iPads and Macs on the same iCloud account, too.

While smartphone cameras have long offered zooming, these are typically done with software tricks that degrade image quality. The iPhone 7 Plus has a second lens that offers 2X optical zoom without any image degradation. (Technically, it’s not a true zoom lens, but it uses a separate camera system to achieve a similar effect.)

Twice the magnification might not sound like much, but it makes a big difference when you’re zeroing in on one aspect of a scene. If you then need “digital zoom” — as those software tricks are known — you’re at least starting out with a sharper image. For close-ups, the zoom lens lets you step back to keep your shadow out of the shot.

It’s a shame the iPhone 7 doesn’t have the second lens as well, but it might take a few years for that to happen. Something similar occurred with anti-shake technology, which took two years to move from the Plus to the regular size starting with the iPhone 7.

The new iPhones now have stereo speakers and play audio twice as loud as before. I could do the dishes with the faucet running and still hear my music without putting on headphones. The screens are also brighter, which could help in direct sunlight.

Apple says battery life improves by an hour or two, thanks to higher capacity and efficiencies. No battery is ever going to be enough, but Apple promises 12 to 15 hours of internet use.

If you do upgrade, consider the new jet black model. The back is polished so finely that it looks like glass, yet has the strength of aluminum. It smudges easily — but of course you ought to have a case anyway.