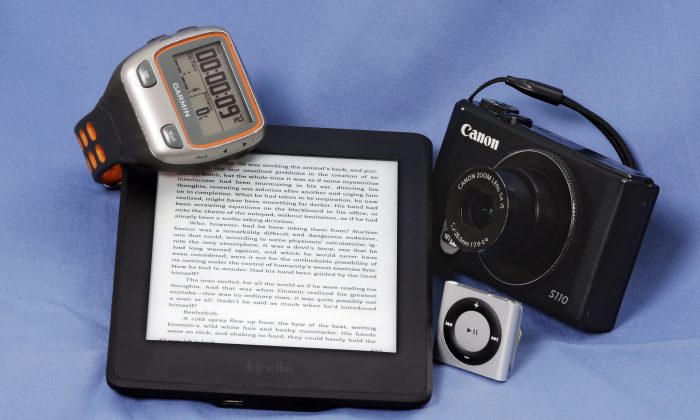 NEW YORK—When Apple announced new iPod music players a few weeks ago, many people asked why anyone would need iPods when smartphones can play music and more. I had that question myself—until I remembered I’ve been carrying an iPod almost every day, mostly for my runs.

Of course, this means one more thing to buy and carry, so the phone is often simpler. But here are ways you might find a stand-alone device preferable.

Sure, I can listen to music on my smartphone, but it’s not convenient on a run. The iPod Nano is much easier to carry, and all the music and podcasts on it don’t eat up space on my phone.

Apple just updated all three iPod models, but only the iPod Touch changed significantly. The Touch is essentially an iPhone without the cellular connection, so it isn’t really a stand-alone music player. The ones that are—the Nano and the Shuffle—got only minor updates, namely in the choices of color.

Then again, as a device designed to play audio, neither needs a super-fast processor. The $49 Shuffle is cheaper than the $149 Nano, but the Shuffle lacks a display and gives you fewer options to choose songs, forward, or rewind. The Nano also has an FM receiver and fitness-tracking capabilities—though a stand-alone fitness device is better for that.

I’ve worn smartwatches like the Apple Watch and general-purpose fitness trackers like the Fitbit. I’ve also used my phone and the Nano to track my workouts.

10 Energy and Water Saving Gadgets for Your Home

Top 3 Gadgets to Have in Your Car at All Times

None of that beats my Garmin GPS sports watch, which specializes in tracking running, cycling, and swimming workouts.

That’s not to say the other devices aren’t good. The Apple Watch is quite accurate when you have an iPhone with you, as it borrows the phone’s GPS. The high-end Fitbit Surge model comes with GPS, as does Sony’s SmartWatch 3 and Microsoft’s Band.

But the Garmin watches I’ve used do a lot more. You can record splits, such as the time it takes to complete a lap. For pace, you can choose to display current pace, average pace for the whole run, or average pace since the last split.

The model I currently use, the Forerunner 310XT, is bulky and isn’t meant for all-day use. There’s no touch screen or anything fancy. But it’s great for what it’s supposed to do. Plus, because it’s an older model, you can find one for well below the $250 suggested retail price.

With a stand-alone reader, I’m not constantly tempted to check email and Facebook, as I am reading on a tablet. In addition, e-reader screens are typically better than tablets outdoors because they have to be only good for displaying black-and-white text—not colorful video, photos, or magazines. With tablets, you have glare.

I’ve found Amazon’s Kindles among the best e-readers. They tend to be slimmer and lighter than other readers, and they have reading-related extras, such as more information on characters, places, and terms in a novel.

The $119 Paperwhite model will be adequate for most people. The Voyage has conveniences such as auto-brightness for the screen, but it’s also $80 more.

I used to shudder when I saw people rely on smartphones for their precious digital memories, as stand-alone cameras were much better. But these days, I usually leave my stand-alones behind, too. Smartphones have improved tremendously and even outsmart point-and-shoot cameras sometimes with advanced software.

Usually, a good phone camera is good enough, but it’s no match for a stand-alone camera, particularly an SLR, for those special moments.

When Phones Are Better

Navigation is one area where a phone will do just as well—perhaps even better—than a stand-alone GPS device in a car. A mapping app on a phone is more portable, for starters, and can be used for walking and transit directions, not just driving.

A stand-alone GPS device can be mounted on the windshield and won’t drain your phone’s battery, but you can counter that with a mounting accessory for your phone and a charger that plugs into the car’s cigarette lighter.

As much as I like stand-alone gadgets for many tasks, I don’t see navigation as one of them.