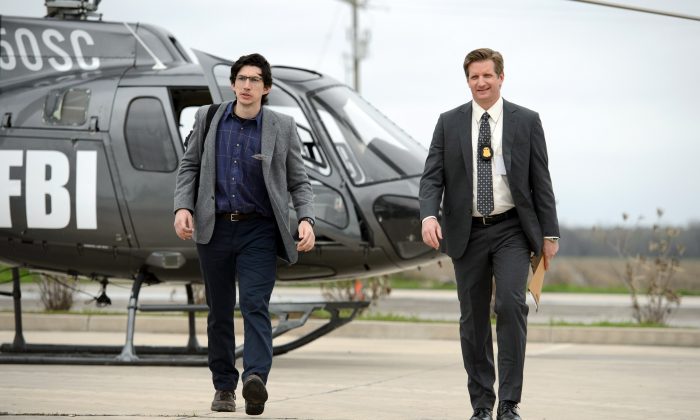 “Midnight Special” is one of those rare, stimulating creations that grabs you and penetrates your bloodstream from start to finish. This unique tale about a kid with special powers skillfully melds mood and story, giving the entire experience the feel of a thrilling getaway chase—one that you’re part of, too. Director Jeff Nichols dares you to get in, shut up, and come along for the late-night drive down some desolate Southern roads where the headlights are optional and the mission is life or death.

As with his riveting 2011 breakout “Take Shelter,” Nichols doesn’t reveal details carelessly. It forces you to pay attention and give yourself to his vision.

Take the first scene. We hear about a child’s abduction on a television broadcast. Then we discover that we’re with two men (Michael Shannon as Roy and Joel Edgerton as Lucas) in a motel room. They’re paranoid about something. Then we see a white bedsheet draped over the outline of what appears to be a child, and you realize you’re with the abductors. It’s an unsettling milieu.

But then Roy removes the bedsheet to reveal a child (Jaeden Lieberher) who is neither scared nor upset. He’s calm. He’s wearing noise-canceling headphones and pool goggles and there’s even ordinariness about it. You realize that Roy isn’t evil at all—there’s an undeniable tenderness in his empathetic, haunted eyes, and it just makes you want to know more.

The boy’s name is Alton and he is, to put it too simply, exceptional. He has powers that no one understands, but that inspire obsession, devotion, and fear from those around him. Roy is his father.

He’s taken his son away from a religious cult led by Sam Shepard’s Calvin Meyer, whose service that night is interrupted by federal investigators who have also become interested in the kid. A skeptical, curious NSA agent (Adam Driver) shows up too.

The cult has been using Alton as their prophet. He goes into a trance and speaks in tongues and they take it for scripture. What is most compelling to the government, the leaders, and even his father, though, is a date and location that keeps coming up. Friday, March 6. No one knows what will happen then, not even Alton, but they’ve seen enough to know that it’s not worth questioning. But the kooks, the simpletons, the bureaucrats, the scientists, the law, and the devoted parents alike all know that they must go.

To explain too much about Alton’s powers would be to destroy the shock of the revelations and the ingenuity with which they’re executed. But “Midnight Special” peels the layers of the story away elegantly and confidently.

But the climax doesn’t match the wonder and tension of the journey and the grace of the aftermath. For some, that might make everything before it crumble.

But there is so much more here than that moment. There’s the desperate pursuit of spiritual fulfillment. There’s the blind trust of the awe inspiring but incomprehensible. There’s the simplicity of a parent’s unquestioning trust of their child—and the ever-present fear and knowledge that there will come a day when that child does not need you anymore.

What’s missing is someone who says “wait, what?” when everyone else says “yes.” But all the actors are all so strong that they carry that burden well, especially the criminally underrated Kirsten Dunst, who comes in midway in a part best left to discovery, and Shannon in his third outing with Nichols.

While Shannon excels in pretty much all of what he does, Nichols seems able to look past his height, stature, and penetrating eyes and find the aching sensitivity beneath a sturdy man who might crumble at any moment. Alton might be the exceptional one in this world, but in the movie, that title belongs to Shannon.

“Midnight Special,” a Warner Bros. release, is rated PG-13 by the Motion Picture Association of America for “some violence and action.” Running time: 111 minutes. Three and a half stars out of four.