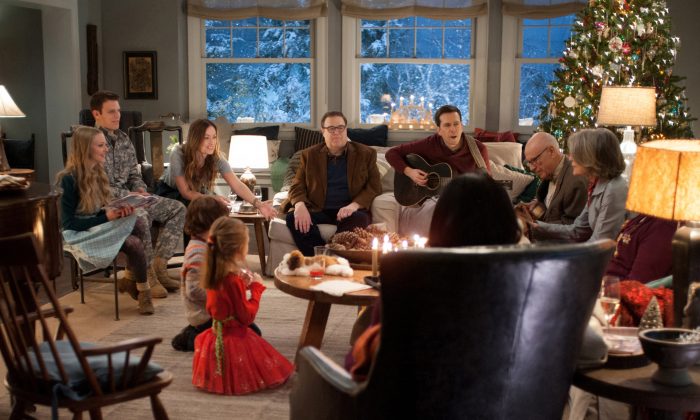 This photo provided by CBS Films and Lionsgate shows, Amanda Seyfried, from left, as Ruby, Jake Lacy, as Joe, Olivia Wilde, as Eleanor, Maxwell Simkins, as Bo, Blake Baumgartner, as Madison, John Goodman, as Sam, Ed Helms, as Hank, Alan Arkin, as Bucky, Diane Keaton as Charlotte, and Alex Borstein (back to camera), in "Love the Coopers," released by CBS Films and Lionsgate. (Suzanne Tenner/CBS Films/Lionsgate via AP)
Entertainment

Review: ‘Love the Coopers’ Is a Moving, Starry Holiday Pic

“Love the Coopers” is pretty formulaic as far as Christmas dramedies go, but there are always going to be those movies that just get to you—despite, perhaps, your best judgment.

Modern holiday movies, with their aggressively unhappy families and sanitized Hallmark sentimentality, occupy an interesting space in entertainment. Big, starry ensemble casts assemble to fight and laugh and cry and realize something profound about life, love and the season of giving with a backdrop of magazine perfect interiors, idyllic snowfall, and a soundtrack of perfectly curated carols.

They’re not high art, and they’re not trying to be, either. Their predictability can be comforting and grating at the same time, especially when most of these stories spend so much time indulging in the discontentedness of its well-off characters.

In “Love the Coopers,” from director Jessie Nelson (“I Am Sam”), four generations of an upper middle class family go about their day separately before gathering for their annual Christmas Eve dinner at the home of Sam (John Goodman) and Charlotte (Diane Keaton). Most are dreading it.

Sam and Charlotte are putting on one last show before deciding to announce their separation. Their daughter, Eleanor (Olivia Wilde), is drinking the hours away in the airport with a stranger (Jake Lacy) to minimize her time at home. Their son, Hank (Ed Helms), is trying to hide the fact that he doesn’t have a job. And Charlotte’s jealous sister Emma (Marisa Tomei) has resorted to shoplifting to avoid having to actually spend money on her sister and subconsciously to avoid the evening altogether.

It goes on: There’s the bow-tie sporting, unsolicited-advice-giving Grandpa Bucky (Alan Arkin) and his lonely, depressive cafe waitress (Amanda Seyfried). June Squibb is there to be sassy. The film jumps around aimlessly until they all finally make it to dinner.

It would be disingenuous not to mention the fact that going into the movie, I didn’t realize it was set in my hometown of Mt. Lebanon, a mid-size suburb just south of Pittsburgh. Snow and highly specific nostalgia only have so much emotional currency, though. Nelson finds beauty in the small moments and the power of a throwback soundtrack peppered with Bob Dylan, Nina Simone, and Otis Redding that helps carry the story along.

Not everything works, to be sure. Helms is out-of-place annoying as the affectless, underemployed dad, and the movie seems unnecessarily cruel to his ex-wife (Alex Borstein). A Tomei bit falls flat. She’s trapped in a cop car trying to psychoanalyze an underused Anthony Mackie and realizing Important things about her own life in the process.

If only the script had forgone a few of these plot lines and focused more on Wilde—the true standout of the star-studded cast. Eleanor is, in some ways, given the oddest subplot. She’s a playwright, she’s dating a married guy, and she’s convinced her parents will be disappointed that she’s still single—so she asks her airport buddy Joe (Lacy) to come back and pretend he’s her boyfriend. In Wilde’s deft hands, Eleanor becomes the most relatable and human of the bunch.

‘Everest’ Film Review: Goddess Mother of the World Decides Who Lives and Who Dies

Perhaps it’s the soothing, storybook quality of Steve Martin’s narration, or the predictable third act turn, but “Love the Coopers” does come together in the end.

Because days later, it’s not the annoying jokes and tropes that linger (and there are many); it’s the sweet sincerity of the film’s strongest assets that rise above the chaos. It’s the genuinely charming banter and burgeoning romance between two near strangers. It’s Keaton and Goodman screaming and laughing while inner tubing down a giant hill. It’s Wilde and Keaton’s affecting, painfully real and too-short scenes together as mother and daughter. It’s even Arkin and Seyfried’s platonic affection for one another.

Maybe a genuine emotional connection is not one to be second-guessed.

“Love the Coopers,” a CBS Films release, is rated PG-13 by the Motion Picture Association of America for “thematic elements, language and some sexuality.” Running time: 107 minutes. Two and a half stars out of four.