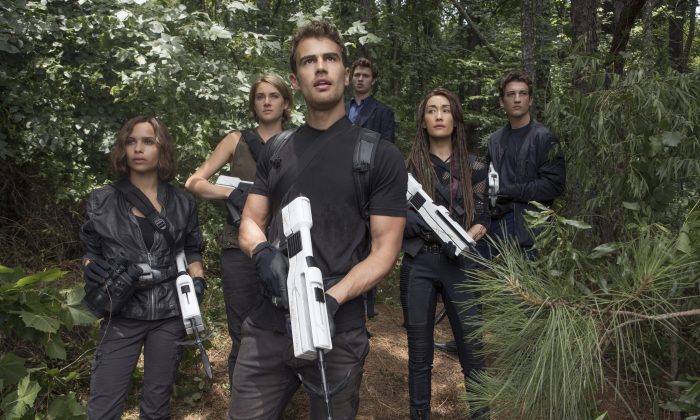 In “Allegiant,” the latest installment of “The Divergent Series” (three out of four), dystopian Chicago might be in disarray, but it’s also become as dull as our heroine Tris’s shapeless, gray Abnegation frocks from the first pic. Unless the filmmakers really try to shake things up for the next and final film, this series might just end up being as forgettable as those duds, too.

And really, this is where things should start getting interesting and urgent. The faction system fell in the last one, “Insurgent,” also directed by Robert Schwentke, and with it all of those senseless names—Abnegation, Candor, Dauntless, etc. Now they’re trying to start a new society, but, it turns out Evelyn (Naomi Watts) and her band of punk rock factionless revolutionaries didn’t exactly have a theory of governance in place when they decided to storm Chicago.

So, she begins with probably the worst possible decision—killing off many of those who were loyal to the fallen leader Jeanine (who was played by Kate Winslet). This leads to a rift with Octavia Spencer’s Johanna, and they go to war.

But that’s all a side show to the exploits of Shailene Woodley’s Tris and Theo James’s Four who decide to escape the city along with a few others (Zoe Kravitz, Miles Teller, Maggie Q, and Ansel Elgort). In the last movie, Tris learned that there was life outside of the walls and they resolve to find out what that means with all the casualness of a couple of urbanites deciding to try out that new brunch spot two neighborhoods over.

What is out there, located at the remains of Chicago’s O’Hare airport (which is only about 15 miles away from the city, by the way), is a headquarters run by a man named David (Jeff Daniels). He likes Tris because she’s genetically “pure,” while everyone else in the Chicago experiment is “damaged,” and he wants to show her off to some other committee in Providence to prove that the system can work.

And it’s here where things might start to feel a little jumbled for anyone who has engaged with the modern sci-fi dystopias of the past few years. The O’Hare outpost looks like “Oblivion,” their genetic perfection goals sound like “The Giver” meets “Gattaca,” the Russian doll world feels like “The Maze Runner,” and the heroine like a less lively version of Katniss in “The Hunger Games.”

But unlike Katniss, who wore her trauma and moral confusion and apprehension on her face, Woodley’s Tris just plays it cool and affectless. She’s never ruffled by anything, and we’re never riled up on her behalf. Four, too, just pouts and broods his way through the film, which has become the de facto mode for YA heartthrobs ever since Edward skulked his way into that “Twilight” cafeteria.

It’s not completely the fault of the actors—the story takes itself so, so seriously that even Miles Teller’s minimally amusing snarky asides feel like treasures in this leaden dud just because he gives some life to them. And while Spencer and Watts seem to have the more interesting plot, you’re almost grateful that their time on screen is kept to a minimum.

If you can learn anything about storytelling from “The Hunger Games” and “Divergent,” it’s that part one of a two-part finale is generally pretty disposable—a first act stretched out to feature length. As long as these series continue to break up single stories into unnecessary two-part finales, they might benefit from taking a cue from television and making the penultimate installment the one you can’t miss, the one where everything goes haywire.

Instead, it’s something to be tolerated and endured while we wait for an actual story to close out the series.

“The Divergent Series: Allegiant,” a Summit Entertainment release, is rated PG-13 by the Motion Picture Association of America for “intense violence and action, thematic elements, and some partial nudity.” Running time: 121 minutes. One star out of four.