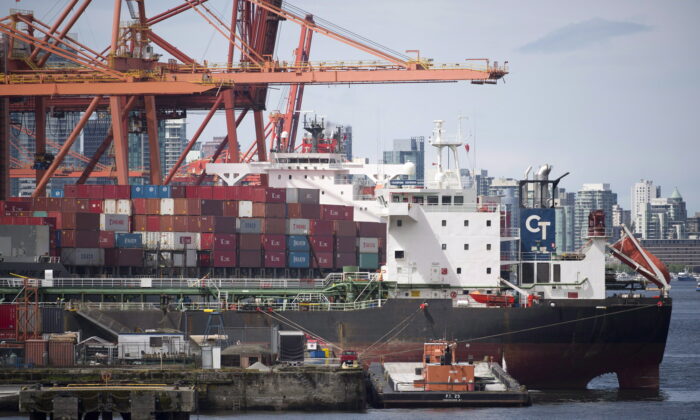 A cargo ship is loaded in Vancouver, B.C., in a file photo. (THE CANADIAN PRESS/Jonathan Hayward)
Viewpoints

No Province Should Have Veto Power Over Another’s Economic Future

For all its talk about equality, the Canadian federal government falls short on securing economic opportunities for all provinces. The current boundaries of Alberta and Saskatchewan perpetuate an unfair lack of coastal land and should be redrawn to foster growth, as argued in a recent paper by economist Gerard Lucyshyn, “Tide-Water Access: Redefining Canada’s Internal Boundaries.”

Access to tide waters, namely a seacoast, is essential for international trade and economic development. International treaties and customary law have historically recognized the right of landlocked countries to tide-water access in some way or another. Having to rely on a neighbour’s goodwill to get products abroad undermines autonomy and increases political interference in the economy.

Lucyshyn, vice-president of research at the Frontier Centre for Public Policy, argues that Canadian citizens in landlocked jurisdictions are at a serious commercial disadvantage. Alberta and Saskatchewan are the only two provinces in Canada without tide-water access. Even though they are part of the same nation, landlocked Albertans and Saskatchewanians do not enjoy the same economic rights as their compatriots due to both geographical and legal barriers.

Those two Prairie provinces must jump through a series of hoops before they can engage in international trade. While the rest need only cross federal frontiers to export, Alberta and Saskatchewan must obtain further permission from a coastal province. At the same time, absent truly free interprovincial trade, Alberta and Saskatchewan face many other barriers that push these provinces into a corner.

This predicament can result in de facto extortion by coastal provinces, as demonstrated in British Columbia’s threat to enact an export tax on coal to force Alberta’s hand in the Trans Mountain pipeline dispute.

The Saskatchewan Trade and Export Partnership (STEP), in its most recent annual report, noted the province’s vulnerable position: “As a landlocked province, Saskatchewan relies on road, rail, and pipeline infrastructure to ship products to international markets. STEP members have expressed growing concern regarding rail-car access, port capacity, and the lack of new and upgraded pipelines for oil and gas shipments. Without significant improvements, delayed and inconsistent delivery will continue to hamper Saskatchewan exports and the Canadian brand abroad.”

Redrawing Canada’s internal boundaries is a matter of federal justice. It would also be nothing new. Throughout history, provincial borders have changed multiple times to settle disputes and assert the autonomy of communities.

Since the Confederation era, two principles have guided agreements to settle Canadian boundaries. The first is the occupation of land and territory, which the 1783 Treaty of Versailles invoked to settle the U.S.-Canada border. Domestically, this principle was also the foundation for establishing the boundary between the Hudson’s Bay Company, the French, and Ontario.

The second principle is that a boundary should follow a watercourse. This settled part of the U.S.-Mexico border dispute, which is why the Rio Grande separates both countries. Most Canadian internal borders are based on this natural demarcation criterion, with the exception of the Prairie provinces. Alberta and Saskatchewan came to be because some bureaucrat drew a geometric line extending the 49th parallel northward.

The 1867 Constitution Act gave the Canadian Parliament the power to establish new provinces and alter their boundaries, provided that the provincial legislatures give consent. It has happened several times before, and there is no reason for current boundaries to be immutable.

In his paper, Lucyshyn proposes two possible alternatives: a parallel-based border and an infrastructure-based border. Both would secure tide-water rights for the Prairie provinces.

Establishing the new boundaries along existing railroads, roads, and pipelines is the easiest and simplest method for all the parties involved, argues Lucyshyn. As agriculture and minerals make up a large share of Alberta and Saskatchewan exports, it would strengthen trade with major partners and help expand into new markets that remain underexplored.

Giving Alberta and Saskatchewan access to and from the sea is within the power of Canada’s Parliament, and it would grant the citizens of these two provinces the ability to exert their fundamental economic rights.

The failure to do so keeps the intolerable status quo of provincial imbalance and subjugation.

Mauricio Bento is an associated researcher with the Frontier Centre for Public Policy and a non-resident fellow with the Property Rights Alliance.