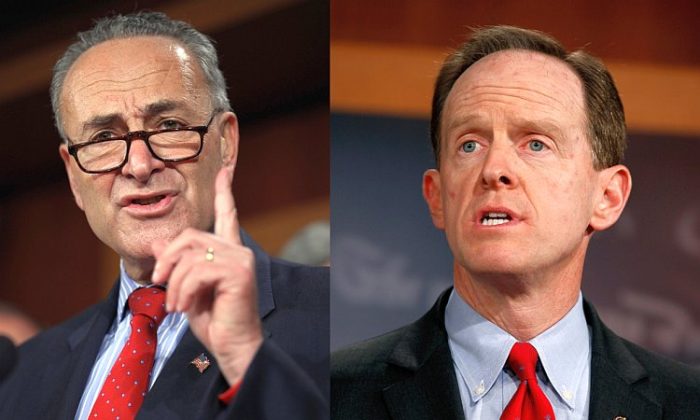 A little less than a week after the Joint Select Committee on Deficit Reduction admitted its inability to come up with a bipartisan compromise deal, legislators took to the airwaves on Sunday morning to discuss the supercommittee’s failure and future prospects for the federal government’s fiscal situation.

Democrats primarily blame Republicans for not being more receptive to tax and revenue increases, while also pointing the finger at anti-tax crusader Grover Norquist, whose Taxpayer Protection Pledge has been signed by 95 percent of Republicans in Congress.

“Well, he does have a great deal of clout, and one of the members of the supercommittee, Democrat, said to me that when they started talking about revenues, the Republican members all said, ‘We’ll never pass anything with any revenues in either the House or Senate because of the pledge,'” said Sen. Chuck Schumer (D-N.Y.) to NBC’s David Gregory on “Meet the Press,” Nov. 27.

Republicans responded that their proposals had indeed contained plans for additional revenues, and that it was the Democrats’ unwillingness to compromise on cuts to social programs that was the deal breaker.

“What’s happened in the meantime is this staggering explosion in spending, increasing in eligibility for entitlements, and creation of whole new entitlement programs. And that’s what’s got to change,” said Sen. Pat Toomey (R-Penn.) to ABC “This Week’s” Christiane Amanpour.

“And that’s what I was hoping the supercommittee could address, some long-term reforms to bend the curves, put us on a sustainable fiscal path, and still have strong economic growth by avoiding some kind of massive tax increase.”

While legislators appeared concerned over the failure of the so-called “supercommittee” to come up with a deal, many held out hope that Congress could perhaps reach a compromise before an unpalatable round of cuts—which total $1.2 trillion and affect both domestic programs and defense equally—kicks in January 2013.

If another debt-reduction compromise hasn’t materialized by then, this sequestration of funds will occur under the terms of the Budget Control Act of 2011, also known as the debt-ceiling deal, which was signed into law during the summer.

Department of Defense officials, and many congressional Republicans, are concerned about the $1.2 trillion in automatic cuts, arguing that it would significantly harm the readiness of the military and undermine national security.

President Obama has promised to veto any attempt by Congress to get rid of the automatic spending cuts.

“I will veto any effort to get rid of those automatic spending cuts to domestic and defense spending. There will be no easy off-ramps on this one,” the president stated at the White House briefing room Nov. 21.

After months of negotiating, the co-chairs of the bipartisan supercommittee admitted defeat last Monday and said, in a released statement, “After months of hard work and intense deliberations, we have come to the conclusion today that it will not be possible to make any bipartisan agreement available to the public before the committee’s deadline.”

Bipartisan deficit-reduction proposals in the past, including the Simpson-Bowles plan, the Bipartisan Policy Center’s Rivlin-Domenici plan, and the Gang of Six plan that was produced over the summer during the debt-ceiling debate, all contain significant reforms to programs like Medicare, Social Security, and defense spending, while also raising additional tax revenues.

Several of the legislators that took to the airwaves on Sunday expressed optimism at the idea of a Simpson-Bowles-style compromise before the automatic cuts kick in in 2013.