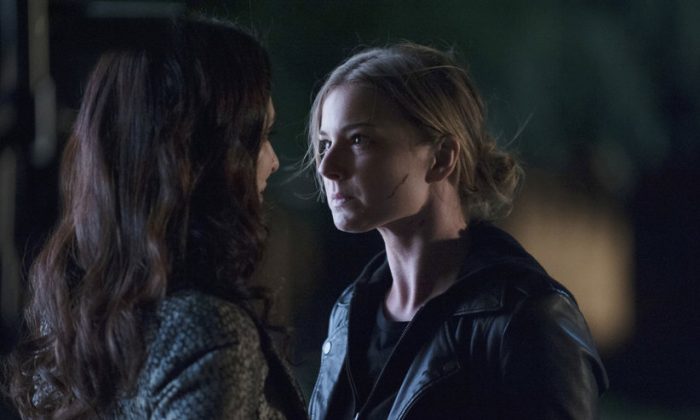 Revenge on ABC has been renewed for a season 4–but it’s going to be different in the new season.

First, there are going to be two deaths in the season 3 finale–one of which will leave Emily crying. So that’s two characters out for season 4.

TVLine also revealed that the finale will include “the emergence of a new scheme team.”

Fans have been speculating that the mysterious D.C. may be David Clark actually alive, or someone avenging his death–but there’s been nothing official on this front. There also hasn’t been any official confirmation that Aiden won’t be back next season.

Meanwhile, with all the restructuring this season has helped the show return to its season 1 feel. And executive producer Sunil Nayar said that the finale sets the next season up for another reboot “in ways you can’t begin to imagine.”

He also told TVGuide that the finale will include major cliffhangers for every single character.

Viewers should pay close attention in particular to the last two scenes, which will indicate where the show is heading.

It’s going to be a totally different show next season — a reincarnation,” Nayar said. That includes the major shift of Victoria finding out who Emily really is–which will change things even more if they both stay alive.

ABC just announced the Revenge renewal last week but a premiere air date hasn’t been announced as of yet.