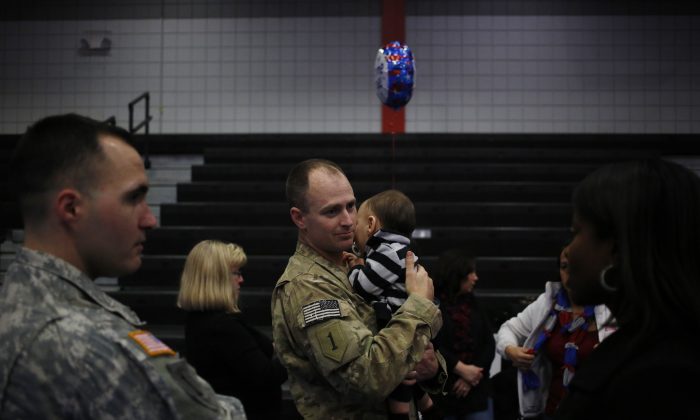 Soldiers returning home from war may find themselves engaged in a battle of “warring identities” as they transition to civilian life.

Much of the research on post-combat mental health of veterans focuses on problems like post-traumatic stress disorder (PTSD) and major depression. A new paper focuses instead on how identity conflicts between being a soldier and a civilian can manifest as mental distress.

“You can’t really do research on veterans mental health without some kind of dialogue on PTSD, but we’re trying to move away from the standard PTSD framework to contextualize the veteran experience and get a more accurate picture of what vets returning from war look like as opposed to just looking at the medical side of things,” says R. Tyson Smith, visiting assistant professor of sociology at Brown University.

To get this picture, Smith and co-author Gala True, from the Center for Health Equity Research and Promotion in Philadelphia, conducted lengthy interviews with 26 veterans who had recently served in Operation Iraqi Freedom (OIF) and Operation Enduring Freedom (OEF).

For the study, published in Society and Mental Health, the researchers used a semi-structured interview style consisting of non-directive, open-ended questions such as “Tell me about your experience while deployed,” “Whom, if anyone, do you speak to about your war experiences?” and “What, if any, issues have you been dealing with since your return?”

Interviews typically lasted several hours and were recorded. The veterans interviewed represented all four branches of the military and all had been deployed at least once in OIF or OEF.

An analysis of the veterans’ reported experiences shows that many had commonalities to their stories, in particular the sense that their combat experience was something that few could understand and that they felt “alien” among family and friends.

Confounding the issue is the fact that the current wars are much less visible than previous wars like Vietnam, where many Americans knew someone who served. Many of today’s soldiers refer to themselves as the “less-than-one-percent.”

“Within our culture, there’s this dichotomy of the valorous hero on one side and the battered, hair-trigger vet on the other. And the true experience is often not at those extremes and leaves veterans feeling if not judged, misunderstood,” Smith says.

Many of the soldiers also spoke of combat as a time when they felt “safe,” even more so than when returning to the United States. The military is a highly regimented institution where soldiers develop identities that give them a sense of order, obedience, and collectivism, the authors write. When they return home, “behavior is suddenly voluntary and the lack of regimentation (and a larger sense of purpose) is a basis of distress.”

Many soldiers have difficulty creating an identity when they return to civilian life, Smith says.

“You’re making sense of who you are again and that’s a process that we all do in life on a regular basis, but in this case you return and it’s distressing trying to make sense of yourself after this combat experience.

“Within the total institution of the military, while there are threats and harms, it was also profoundly shaping who you were and your sense of self. That order and identity is no longer part of the everyday after exiting the service.”

GETTING VETERANS TO TALK

Some veterans reported feeling like they were starting all over again when they returned home. Others felt distanced from their civilian relationships, afraid to disclose too much about their combat experience for fear of being judged or misunderstood.

Withholding such information can stunt a veteran’s ability to reintegrate into civilian life by straining those relationships with people who would be their primary support systems, the authors say.

These “warring identities” can act as a catalyst for or even present as mental health behavioral problems. More attention needs to be given to this psychological process as it plays out when soldiers return from war and to broadening the framework surrounding soldiers’ mental health issues beyond diagnosable illnesses such as PTSD and depression.

While expansion of social support programs is always needed, expansion of dialogue around the veteran experience would be a good first step, Smith says.

“I think that one of the larger scale issues is that we have a lot of difficulty talking about the realities of war. There’s a lot that can be done to enhance the understanding and conversation around what are definitely difficult topics.

“Seeing, handling, coping with dismembered children is hard to think about for all of us, and we really want to turn a blind eye to it. But turning that blind eye is part of the continued struggle.”