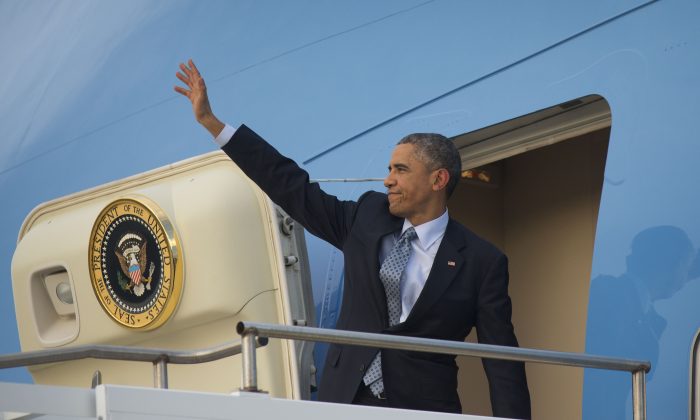 U.S. President Barack Obama waves as he boards Air Force One during his departure at Royal Australian Air Force Base Amberley, Sunday, Nov. 16, 2014 in Australia. Obama is heading back to Washington after visiting China, Myanmar and attending G20 Summit in Australia. (AP Photo/Pablo Martinez Monsivais)
Politics

BRISBANE, Australia—After a productive trip abroad, President Barack Obama headed home Sunday on a collision course with Republicans on immigration and an oil pipeline project, showdowns that threaten prospects for cooperation over his remaining two years in office.

The contentious immigration debate could mean a year-end fight over keeping the government running, if some GOP lawmakers get their way.

On the foreign policy front, there is a Nov. 24 deadline in nuclear negotiations with Iran, and questions are surfacing within the administration about whether to overhaul U.S. policy toward Syria.

When Obama set off for the Asia Pacific, both the White House and Republicans were suggesting that the GOP’s decisive takeover of the Senate could pave the way for bipartisan breakthroughs. But just two weeks after the election, that optimism largely has faded, making it increasingly likely that Washington will churn through two more years of gridlock.

Republicans attribute the swift shift in tone largely to Obama’s plans to move forward with executive actions on immigration that potentially could shield from deportation about 5 million immigrants who are living in the United States illegally. The president has pledged to announce the measures before year’s end; he could act shortly after returning to Washington.

The incoming Senate majority leader, Mitch McConnell, has warned that such executive actions would “poison the well” with the new Republican-led Senate and could prevent the GOP from working with Obama on other potential areas of agreement.

Republican leaders are considering what to do if Obama presses ahead. More conservative members want to use upcoming spending bills to block the president, but that could set the stage for a showdown for another government shutdown.

Obama said that possible threat would not dictate his timing in flexing his powers. He said is main concern “is getting it right.”

The fight over the Keystone XL pipeline that would run from Canada to the U.S. Gulf Coast also has political implications for the president, not just with Republicans but also his own Democratic Party.

Democrats see passage of a bill forcing construction of the project as a last-ditch effort to save Sen. Mary Landrieu, who faces a runoff election next month against GOP Rep. Bill Cassidy in oil-producing Louisiana.

The House passed a measure to move the project forward on Friday, and the Senate is set to act. But Obama has all but threatened a veto, repeatedly saying the only way the pipeline can be approved is after the completion of a long-stalled State Department review.

“We have to let the process play out,” he said.

On Iran, Obama faces a deadline to reach a final agreement in sensitive nuclear negotiations. High-level talks in Oman last week failed to make major headway, potentially setting Obama up for a choice between pursuing another extension or abandoning the diplomatic effort.

The president has asked the Congress to start debating a new authorization for his airstrike campaign against Islamic State militants in Iraq and Syria, though he expects the legislative effort to pick up next year when Republicans take control of the Senate. The debate comes as Obama faces questions from within his own administration, including from Defense Secretary Chuck Hagel, about the effectiveness of the military operation, particularly in Syria.

White House officials have denied that Obama is undertaking any formal review of his Syria strategy and the president said Sunday that he was not considering ways to oust Assad.

Also on the agenda: getting the Senate to confirm his nominee for attorney general, federal prosecutor Loretta Lynch. The White House is not pushing for that in the postelection session of Congress, and says the president is leaving the timing up to Senate leadership.

Democrats are reluctant to push a fight with an empowered GOP over the process and White House officials say they are confident Lynch will be confirmed even with Republicans in control. The GOP takes over in January.