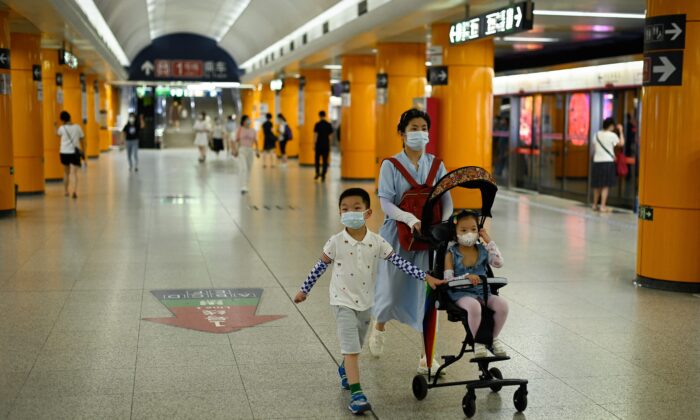 A woman walks in a subway station with two children in Beijing on July 5, 2022. (WANG ZHAO/AFP via Getty Images)
INSIDE CHINA

Beijing residents returning from domestic trips have been asked by authorities in some communities to wear COVID-19 monitoring bracelets. The orders prompted wide criticism from the public over escalated government surveillance.

According to mainland Chinese media outlet Caixin, a female Beijing resident who returned from Guangdong on July 13 was told by the community office that she must quarantine at home for seven days. At 1 a.m., a community staffer came to give her an electronic monitoring bracelet and asked her to download the “Wei Health” app to upload the data collected by the bracelet. She was told that she had to wear it throughout the quarantine period so that it could monitor her body temperature.

The product manual describes the bracelet as a “multi-signal sensing device,” with functions including body temperature measurement, heart rate monitoring, and exercise monitoring. It also states that the device needs to be worn 24 hours per day.

A staff member of a community office in the Chaoyang district of Beijing told Caixin that the COVID-19 monitoring bracelet is a new control measure ordered by authorities a few days ago, and its most useful function is to pinpoint the wearer’s precise location.

Some Beijing residents shared on social media that they had also been asked to wear the COVID-19 monitoring bracelets.

They complained that they were already reporting their body temperatures regularly to authorities and had taken various tests during quarantine. The new order from the authorities requiring them to wear monitoring bracelets was excessive, they said. They also criticized some people and officials for using COVID-19 prevention measures as opportunities to make money.

Residents of the Tiantongyuan community said they hadn’t seen any official policy or regulations about wearing monitoring bracelets and questioned “whether it violates personal privacy.” After many complaints, community staffers eventually took the bracelets back.

The staff of the Wangquan Sub-District Office in Shunyi district told the Beijing Radio Station that the city has selected three districts to trial the monitoring bracelet measures.

On July 14, staff at Beijing Municipal Health Commission stated that they never issued any policies to require wearing monitoring bracelets.

“It might be local communities’ epidemic prevention measures,” they said.

Current affairs commentator Wang He told The Epoch Times on July 15 that such orders must be the policy of Beijing authorities and that the way he saw it, the health commission isn’t telling the truth. Beijing is conducting an unannounced pilot program with the monitoring bracelets, he said. But because the matter is too sensitive and facing a lot of public backlash, the commission is denying that it has such a policy.

Lai Jianping, an international law scholar, agreed that the new order was most likely planned and pushed by higher-level authorities of the Chinese Communist Party (CCP). He noted that the company producing the monitoring bracelets, Beijing Microchip Perception Technology Co., belongs to the Beijing Municipal Science and Technology Commission and the Haidian district government. Besides expanding government surveillance of citizens, “there is another purpose, which is to take this opportunity to obtain government funds through government procurement of the device.”

Wang said that this shows that the CCP’s COVID-19 prevention industry has grown, and also that “the COVID-19 pandemic has provided the CCP with an unprecedented opportunity to make its digital totalitarian surveillance system reach a historic level.

“It has gone from vaccination and nucleic acid testing to the monitoring bracelet to completely control people. It can control whoever it wants to. This is a very scary sign.”

Fang Xiao and Yi Ru contributed to the report.