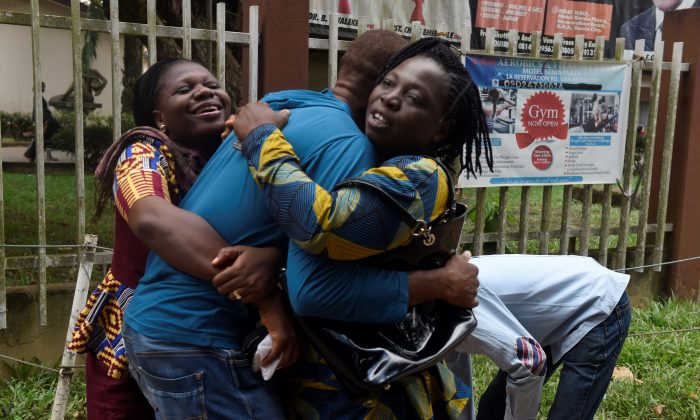 Returnees count gains, losses as they endeavor to start a new life in Nigeria
By Toluwani Eniola

LAGOS, Nigeria—After failed attempts to cross the Mediterranean Sea to Europe in search of greener pastures, many Nigerian migrants have yet to recover from their horrific experiences.

Months after returning home, not much has changed for the returnees, who lament their difficult experience of resettling in Nigeria after repatriation from Libya. Among the returnees, the tales are similar: failure to get a job, financial loss, accumulated debt, and disillusionment.

In 2017, a CNN video of a slave auction in Libya—where African migrants were purchased, sold, and tortured like animals—caused a global uproar, leading to the repatriation of thousands of Nigerians.

Festus Okosun, 40, is one of the returnees.

“I can never forget the terrible experience in Libya,” his said, shaking his head as he recalled his slavery and prison experience.

Okosun fell for the tricks of the traffickers who promised to help him migrate to Germany via Libya, before he encountered difficulties on the North African coast. He and other Nigerians were marooned on the Mediterranean Sea before Libyan authorities arrested them.

“I never believed I would return to Nigeria alive. I went by road from Nigeria to the Niger Republic and then to Libya. I was kidnapped in Libya and spent six months in prison before they released me,” he told The Epoch Times.

“I fell into the hands of Arabs, who took me to their slave camps. I had to reach out to my family in Nigeria to sell my property so I could be released. I don’t know how I am surviving now in Nigeria. I have no job and only living by God’s grace. I am begging the government to supply me with my work kits, so I can go back to my welding job that I quit before leaving Nigeria.”

Traveling from Nigeria through Niger’s desert to Libya is a dangerous venture, replete with cases of sexual abuse, robbery, and kidnapping. According to the U.N. International Organization for Migration’s Missing Migrants Project, “2,834 migrants died at sea on the route between Libya and Italy in 2017, while 315 have perished since the beginning of 2018.”

Nigeria is currently overwhelmed by the challenge of discouraging its desperate youth from embarking on the potentially deadly voyage.

For Prince Olumese, it was a combination of overwhelming life circumstances that forced him to leave Nigeria in 2015. But 34-year-old Olumese described the illegal route from Libya to Europe as “hell,” saying he wouldn’t even advise his enemies to try it.

Olumese, a former private school principal, and his wife planned to escape to Italy from their deportee camp in Libya before they were eventually deported in January last year. Back in Nigeria, their tale of hardship has continued with no end in sight.

“The problem I have now is more than a lack of a job,” he said. “I am worried because my wife wants to travel back to Libya. She cannot bear the shame. She traveled to Libya at the age of 16 through the help of traffickers. Her family called her a failure because they expected her to come back from Libya with money.”

Support came the way of Okosun, Olumese, and other Libya returnees when they recently received a call to take part in a four-day business training program, courtesy of the International Organization for Migration (IOM).

More than 2,000 Nigerian returnees from Libya have been enrolled in the vocational training program, through the help of the U.N.’s Migration Agency in different Nigerian cities. The program runs in phases.

“The business skills trainings aim to help people get back on their feet in their communities. … [It] also offers in-kind reintegration assistance to help some of the returning Nigerian migrants start businesses like tailoring shops, beauty salons, and market kiosks at home,” the IOM said in a statement.

This training opportunity, however, doesn’t accommodate all returnees. A similar program by the Edo state government of Nigeria has equipped other returnees with the opportunity to learn new skills.

Solomon Okoduwa, an aide to the governor of Edo on human trafficking and illegal migration, confirmed to The Epoch Times that resettling the victims is fraught with challenges, citing the huge needs of the migrants.

“Some of them need to go back to school, get a job, and enroll in vocational training. We have placed some on a monthly stipend. Some of them are in counseling and psychotherapy. Those with medical issues are receiving treatment, but resources to resettle them are limited,” he said.

Ibrahim Farinloye, spokesperson for the National Emergency Management Agency, told The Epoch Times that about 8,738 “assisted voluntary returnees” had been helped back home from Libya since the IOM-EU special intervention began in April 2017, ending Dec. 19, 2018.

He said the returnees are regularly being reintegrated into society after psycho-social training to help them overcome the trauma they experienced.

“In conjunction with IOM, the federal government, through the Federal Ministry of Labor and Productivity, has established Migration Resource Centers in Lagos, Benin, and Abuja to render free services to intending migrants to seek adequate and informed knowledge of the situation of things in their intended destinations, such as following the regular and legal routes, job opportunities in the intended country of destination, and security situations in that country,” he said.

Even though the government’s training efforts have been commended by some of the returnees, most of them complain of a lack of capital to put their new skills to use.

For Brown, another returnee, the reality of starting from the scratch is frustrating. He spent his life savings of over 3 million Nigerian nairas (over $8,000) on the trip to Libya.

Before he decided to migrate, he was a businessman, but he suffered a loss in 2015 when his shop was razed by a fire. Overwhelmed by debt, his in-laws put pressure on him to pay the bridal price as part of his marriage rites. That fueled his determination to try for better opportunities in Italy.

“I spent nine months in Libya. I was in prison for three months and on the Mediterranean Sea coast for five months. Our boat developed a fault at sea and it was an Arab fisherman that helped us to return to Libya,” he said.

“In the nine months since I left Nigeria in January 2017, I had spent all my savings and I still could not get to Italy as planned. Before I came back, I was already indebted. My mother sold the piece of land she had to rescue me out of the prison.”

Brown has benefited from five skills workshops, but complained of a lack of capital to start a trade.

“I have five certificates from such training,” he said. “But I don’t have enough money to start.”

Another returnee, who simply identified herself as Joy, had the same complaint.

“There are so many unfulfilled promises to the returnee migrants. After the government training, many of us did not get capital to implement our business ideas,” she said.

Making the Most of Lost Opportunities

Despite the odds, Brown is determined to turn his bitter experience into a meaningful venture by becoming an anti-trafficking ambassador.

He recently created a foundation to educate young people and communities in Nigeria on the dangers of trafficking, visiting churches and groups to share his tales of woes in Libya in order to dissuade other desperate Nigerian youths from using illegal routes to escape the country.

Brown believes more needs to be done at the grassroots level to create awareness about trafficking and its deadly effects, but also advises the government to address the problem of unemployment, which he described as the root of the problem.

“I saw many Nigerians die in Libya without the knowledge of their family members. We need to stop the trend. Although I have lost many things, I am grateful to be alive,” he said.