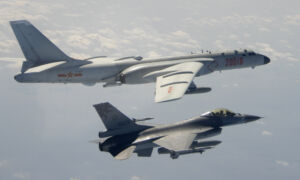 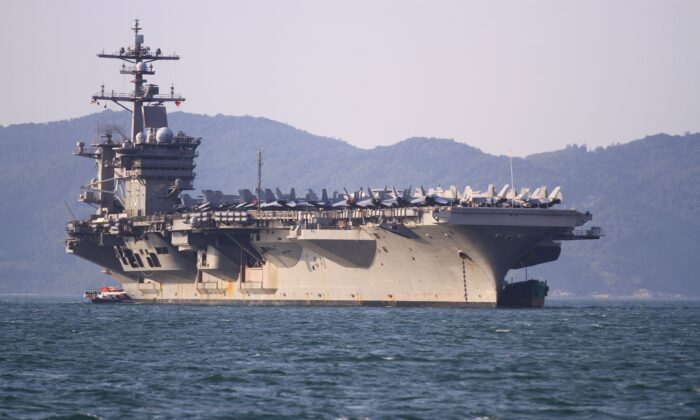 Military aircraft including F/A-18 fighter jets are seen parked on the flight deck of the USS Carl Vinson, the U.S. Navy's nuclear-powered Nimitz-class aircraft carrier, anchored off the coast in Danang on March 5, 2018. (Linh Pham/AFP via Getty Images)
Military

Return of US Military Might to Indo-Pacific Sends a Message to Beijing: Experts

Since August, both China and the United States, with its allies, have increased their military presence around Taiwan, heightening speculation about whether the Chinese Communist Party (CCP) would risk attacking the self-governing island.

In a phone interview with the Chinese edition of The Epoch Times on Aug. 30, Steven Xia, a former Chinese official involved in armament technology development, said that the West’s increased military activity has taken place as the CCP has aggressively flexed its muscles in the region.

The Carl Vinson Carrier Strike Group, and other U.S. Naval vessels, alongside a number of vessels from other nations, have been operating in waters near Taiwan and in the South China Sea over the past several weeks.

From Aug. 22 to Aug. 24, the HMS Queen Elizabeth-led carrier strike group and the USS America LHA-6 (a light aircraft carrier) and its strike group, held a joint military exercise in the Philippine Sea adjacent to the South China Sea. Military vessels from Japan and the Netherlands also participated in this large-scale exercise.

Xia said the military power that the aircraft carriers represented was immense.

“These three aircraft carriers form a greater attack power than that of the entire military of many countries. They carry nearly 80 fighters in total,” he said.

“Each destroyer [from the strike groups] have hundreds of air-to-surface missiles, and nuclear submarines also carry intercontinental cruise missiles. The whole action is consequently huge,” he said.

“Such a large gathering of military force in the Western Pacific is meant to tell the CCP to behave itself. The CCP is not able to stand the attack power of the U.S. and its allies.”

On Aug. 28, the USS Carl Vinson (CVN-70) docked for several days at Japan’s Yokosuka Base after a lapse of 18 years.

On Sept. 10, a U.S Navy media release said the Carl Vinson Carrier Strike Group was operating in the South China Sea to “uphold the free and open use of Indo-Pacific waters in support of security and stability in the region.”

Lee Cheng-hsiu, a military expert at the National Policy Foundation of Taiwan, also believes the military activity in the Indo-Pacific by the U.S., and its allies, especially near the Taiwan Strait, is meant to be a deterrent.

As part of that, USS Carl Vinson’s visit to Japan is an important signal, Lee told the Chinese edition of The Epoch Times on Aug. 30.

“The Biden administration’s military and diplomatic strategies are now clear, which are to transfer its military power to the Indo-Pacific region,” he said.

The Biden administration has always avoided calling the CCP an enemy but regarded it as its biggest competitor.

“But everyone knows that Biden’s implicit statement meant something else. USS Carl Vinson’s return to the Japanese base is basically aimed at the CCP,” he said.

According to Lee, only Japan can be regarded as a reliable ally for Washington in Asia. Although South Korea has signed a treaty of military alliance with the U.S., it cannot provide sufficient assistance against the CCP.

As for ASEAN (Association of Southeast Asian Nations), it does not want to be involved in a possible U.S.-China confrontation. As a result, Washington must increase its own military power in the Indo-Pacific region to deter the CCP.

“Biden hopes that Europe, including Britain, France, Germany, and other NATO allies can take on more defensive tasks so that the United States can shift its focus to the Indo-Pacific region,” Lee said.

The exercises simulated island seizure and multi-service joint operations but Lee said he believed that the CCP would not dare to attack Taiwan.

He said the U.S. military is both more advanced and more experienced than the Chinese military. There is a large difference in the combat power between the two countries, he added.

However, the CCP has a geographical advantage and it can devote all its resources to war, Lee pointed out.

“That said, the CCP is not confident that its geographic convenience can complement its disadvantage in armament,” Lee said. “That’s why the CCP has been using military exercises to show off, but it does not dare to cross the red line, because it is aware of its military weakness.”

Lee believed that the CCP fears that an attack on Taiwan could also lead to the collapse of the regime.

“What the CCP is concerned about the most is the stability of its rule. It believes that the Chinese people will not stand up against the regime or demand political democratization as long as the Chinese economy is good,” he said.

“If a war against the U.S. breaks out, the CCP will worry that if it loses the war, the leader must step down and the regime will fall apart. That’s why the CCP uses the so-called intimidation and military exercises to confront and compete with the U.S., but it will not really attack Taiwan,” he said.

Xia holds a different view, believing that the CCP needs to be treated with caution. He said in the past, the international community thought the CCP was just exerting some pressure on Taiwan to contain the United States.

“But the recent military actions by the CCP are now making people think that there is a possibility they could attack Taiwan,” he said.

Xia noted that the CCP recently requisitioned a 16,000-ton civilian roll-on/roll-off (ro-ro) ferry which is able to carry military vehicles for landing in Taiwan. He said that this could be a sign that the CCP is about to take action.

There are 63 ro-ro vessels in China that can be transformed for use in transporting military units, according to a July report published by the Jamestown Foundation, a U.S. think tank.

“These are vessels equipped with built-in ramps that enable wheeled and tracked cargo to load and offload under their own power,” wrote Conor Kennedy, a research associate at the U.S. Naval War College’s China Maritime Studies Institute.

Xia said that the military forces that Beijing has used in recent coastal exercises are of a scale that has never been seen before.

“These actions really worry the U.S. and that’s why the U.S. has deployed as they have on the Western Pacific, the doorstep of the CCP,” he said.

“The U.S. was vague in its strategy towards Taiwan. It was unwilling to say explicitly if it would intervene in case the CCP attacked Taiwan. But from its recent military deployment, it can be seen that the U.S. will definitely intervene,” said Xia.

Terry Zhuo contributed to the article.