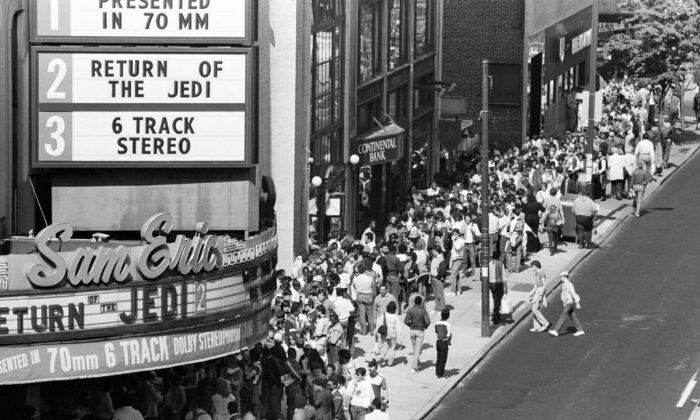 Movie fans line up on Philadelphia's Chestnut Street in advance for the premiere of the movie "Star Wars: Episode VI-Return of the Jedi" on May 23, 1983. (George Widman/AP Photo)
Entertainment

‘Return of Jedi,’ ‘The Fellowship of the Ring’ Added to National Film Registry

LOS ANGELES—The Library of Congress announced Tuesday that films including “Star Wars Episode VI: Return of the Jedi,” “The Lord of the Rings: The Fellowship of the Ring,” and “A Nightmare on Elm Street” are among the 25 movies inducted into the National Film Registry this year. Lopez’s starring role in the 1997 biographical film “Selena” and Cicely Tyson’s “Sounder” in 1972 made the registry as well.

The national library said this year’s selections date back nearly 120 years. The oldest was the “Ringling Brothers Parade Film” in 1902.

“Films help reflect our cultural history and creativity—and show us new ways of looking at ourselves—though movies haven’t always been deemed worthy of preservation,” Carla Hayden, the Librarian of Congress, said in a statement. “The National Film Registry will preserve our cinematic heritage, and we are proud to add 25 more films this year.”

Hayden and film historian Jacqueline Stewart will discuss the new selections in a television special on Turner Classic Movies on Friday at 8 p.m. ET.

The library has selected movies for preservation because of their cultural, historic, and artist importance since the registry began in 1988. This year’s picks bring the total number of films in the registry to 825.

“Return of the Jedi” and “The Fellowship of the Ring” drew significant public support through online nominations.

“It is a great honor to have ‘The Lord of the Rings: The Fellowship of the Ring’ selected this year by the National Film Registry,” said Peter Jackson’s filmmaking team, which includes Fran Walsh and Philippa Boyens. “We are proud to be part of an archive that celebrates and preserves the art of visual storytelling, for generations to come.”

Two animated features made registry including Pixar’s Oscar-winning film from 2008 “WALL-E” and Disney’s “Flowers and Trees” released in 1932.

The library chose a few more memorable titles such as “Cooley High,” “Richard Pryor: Live in Concert,” “Chicana,” “The Long Goodbye,” “The Watermelon Woman,” “Stop Making Sense,” and “Strangers on a Train.”

Additional films on the list include “The Wobblies,” “Pink Flamingos,” “Evergreen,” “What Ever Happened to Baby Jane,” “Hellbound Train,” “The Flying Ace,” and “Jubilo.”