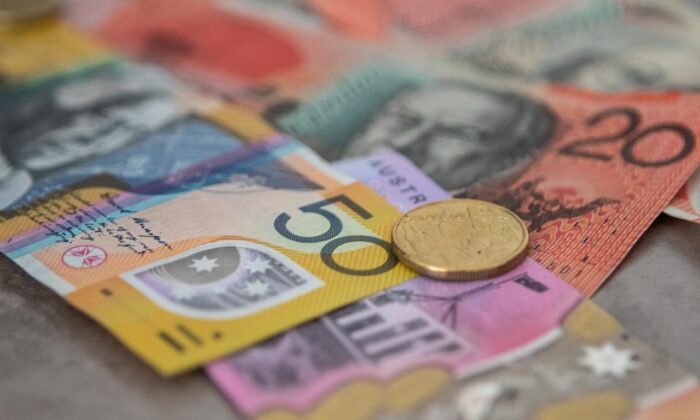 Australian banknotes and a one dollar coin. (Squirrel_photos/pixabay)
Australia

Compulsory superannuation contributions will increase from 10 percent to 10.5 percent for Australian workers in the new financial year.

The increases will continue until reaching 12 percent in 2025, boosting the already vast retirement fund industry that now controls around $3 trillion (US$2.05 trillion) in funds—the fourth largest pension fund in the world.

For some workers, the changes could see employers simply up the amount they pay into their super accounts while leaving their wages untouched. For others, the difference could see their take-home pay reduced with the 0.5 percent compulsory contribution coming from their existing pay packets.

A further legislative change is the removal of the $450 per month minimum wage threshold, which will open the door for part-time workers to receive super.

Compulsory superannuation in Australia is a legacy of the former left-leaning Labor Prime Minister Paul Keating, who established the scheme in 1992.

Super Not Without Its Critics

New South Wales Liberal Senator Andrew Bragg has called for compulsory contributions to be removed entirely, and for Australians to be given the choice to access their existing funds to help pay for their first home purchase.

“Superannuation is a significant failure of Australian economic policy. It doesn’t get many people off the pension, it costs the budget more than it saves, and it reduces agency and individual choices,” he said in a statement on May 25.

The senator has also been critical of super funds donating millions to unions.

“According to Australian Electoral Commission (AEC) data, $12.9 million has been paid from super funds to unions in the 2020-21 financial year. This is a new record, up from $11 million in the previous year,” he said in a March 14 statement.

“The first and fundamental problem is that the system provides no insurance element. What I mean by that is if you don’t earn income during your life, you don’t get any super when you retire,” he previously told The Epoch Times. “If you get injured, sick, must care for your partner, whatever the case may be.”

Instead, he said Australia would be better off investing in the age pension system, which supports more individuals than the super system does.

“The super system is predicated on this idea that somehow the age pension is unsustainable, bad, or unreliable,” he said, noting that the combined value of superannuation’s yearly fees (A$30 billion) and tax breaks (A$40 billion) “swamped” the cost of the age pension.