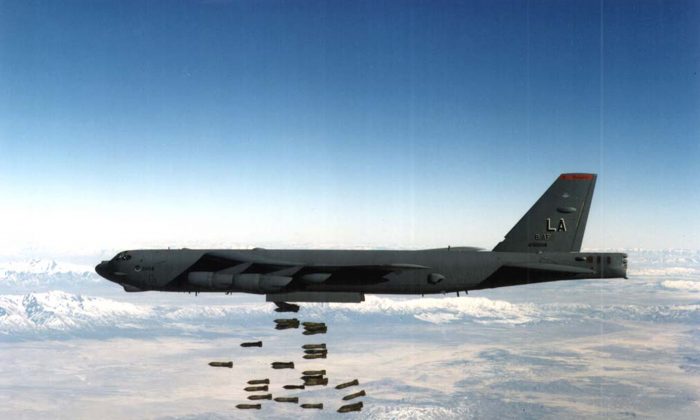 HEDGESVILLE, W.Va.—Not unlike other retirees, Larry Mayou doesn’t pay a lot of attention to the weather—he prefers to just wait and see what happens.

But that’s a far cry from his professional military duties, when Mayou was responsible for helping provide weather forecasts and guidance to some of the nation’s most highly classified projects during his almost 21 1/2 years in the Air Force before retiring in 1984 as a lieutenant colonel.

For example, Mayou was part of a secret rainmaking project that focused on altering the weather over portions of the Ho Chi Minh Trail that extended from north Vietnam through Laos and Cambodia into south Vietnam. The goal was to make the route muddy and less easily traveled by enemy troops and their supplies, he said.

Not surprisingly, this type of weather modification was not easy and complications ranged from predicting air pressure to humidity levels, Mayou said.

But that was only one of Mayou’s many top-secret clearances, including his early days as a weather station counter in 1964 at the Biggs Air Force Base in El Paso, Texas, providing specific weather support for the different types of flying being done by the Strategic Air Command B-52 bomber and Boeing-KC 135 tankers, he said.

Shortly thereafter, Mayou successfully sought to become a weather reconnaissance officer and in 1966 was sent to Anderson Air Force Base on Guam to do this specialized work.

“At that time, they were flying over to Guam in order to go to Vietnam and it required a top-secret clearance because of the nature of their Cold War missions. The weather guy was right in the middle of it, so you had to have the clearances. And that was something that totally amazed me early on because there’s almost nothing in the military that can be done without considering the weather,” Mayou said.

“D-Day happened when it did during World War II because of the weather. It was actually delayed one day because it was unsuitable, and then it was questionable to go the next day. They decided at the last minute to go ahead, because they felt the weather was going to break. Eisenhower went on a weatherman’s forecast,” he said.

In the end, he was a weather officer on flights that eventually included the oceans and islands from the Marshall Islands to the mainland of southeast Asia, China and Japan.

“You can’t do a photo reconnaissance mission without knowing if there are going to be clouds or not,” he said, adding that weather conditions were also important in terms of refueling aircrafts on long missions—including from the United States to Guam.

“Back in those days, before weather satellites got so good, they had people up there who were flying airplanes back and forth. It was my responsibility to say if there was good visibility and wind speeds as part of the weather observations I did about every 20 minutes—information that was then broadcast to the Joint Typhoon Weather Center on Guam for the tracking and forecasting of typhoons as these storms moved across the area,” Mayou said.

Typhoons are both dangerous and beautiful, but it depends on where—and how—they are being viewed, he said.

“I accumulated 2,000 hours of flying time and logged 30 flights into the eyes of full-sized typhoons in two years. Those two years also included beautiful sights from flowing low—often at only about 1,500 feet about the ocean—so that you could see the coral reefs and islands of all sizes,” Mayou said.

Time spent flying over the Philippines, Taiwan, Okinawa, Japan, Vietnam and Thailand, he said, provided some of his most memorable experiences.

He was assigned to Sembach Air Base in 1971, a time when the Cold War dictated that military operations in Europe were focused on potential Communist threats, said Mayou, who spent a total of five years in Germany.

When he was reassigned in 1976 to the Air Force Global Weather Central at Offutt Air Force Base in Omaha, Nebraska, that provided “weather data in all forms and anywhere to military units around the world,” Mayou said.

Eventually, he took charge of the specialized forecasting products dealing with support to many classified and unclassified special training, as well as tactical military operations around the world.

“You never knew what or where you would get a request for some kind of weather forecast. Any trouble spot in the world where the United States military might be involved was likely to require weather forecasts of all kinds, and we were usually involved in directly or indirectly supporting them,” he said.

In June 1980, Mayou was reassigned to commander of the weather detachment at the Pentagon. Located in the Air Force Command Center, his duties included providing weather to many command, control agencies and staff offices located there—including the Army and National Military Command Center.

“Part of my command was a small weather unit at an underground location which was a wartime location for the National Military Command Center and president. The same operating location also provided weather observations at Camp David. Also part of our mission was support to the National Airborne Command Post which would take the president and staff airborne in case of a crisis,” he said.

“We seemed to get calls for travel forecasts for the White House and Congress as well. I had access badges to much of the Pentagon, and covered a lot of hallways. Never a dull moment for sure,” Mayou said.

After retiring from the military, Mayou worked for Martin Marietta as a contractor to the Federal Aviation Agency on a large, modernization project, before eventually working with another company in Boston, Massachusetts.

In June 2000, Mayou and his wife Becky retired to the Woods Resort and have been busier than ever, he said with a laugh, adding that he is the longtime chairperson of the development’s Four Seasons Association that holds social events and shares communications among the private community’s residents.

An active volunteer with Berkeley Community Pride and Back Pack Program, Mayou has also used his carpenter talents at the Apollo Theater by helping build sets and other items needed for the various productions.

“They do such a good job there, that I’m proud to do what I can to support their efforts,” he said.

Looking back, it’s clear this is what he was meant to do, even though his early plans centered on working with Rochester Gas and Electric as a plant engineer and eventually moving to a nuclear power plant being built near Rochester, New York.

Mayou said he enlisted to avoid being drafted because he wanted to use his college degree, but didn’t really know anything about meteorology—much less about making it a career.

However the benefits have been measurable, including having been sent to New York University for a year of undergraduate and graduate meteorology classes as his first Air Force assignment.

And, of course, traveling around the world.

Still, there were some trying times, Mayou said with a smile.

Including when he applied to go into aerial weather reconnaissance, even though he had “little flying experience and was prone to air sickness. But sure enough, I was accepted,” he said.

In the end, the Air Force provided “more excitement and adventures than I dreamed possible. I can’t say I would change a thing,” Mayou said.