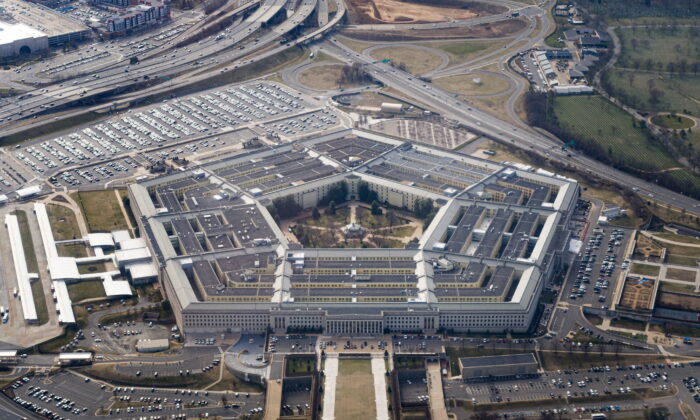 The Pentagon is seen from the air in Washington on March 3, 2022, more than a week after Russia invaded Ukraine. (Joshua Roberts/Reuters)
Social Issues

Retired U.S. Army Major General Paul Vallely, who has been sounding the alarm against socialist indoctrination in the U.S. military, criticized the Department of Defense (DOD) for lifting a ban that prohibited military and civilian personnel from looking up abortion-related terms on Pentagon computer networks.

Vallely is against the support that the DOD is giving to provide access to abortions.

“I do not support the Defense Department supporting abortion rights,” Vallely told The Epoch Times.

“This again is social engineering of our military forces that detracts from the readiness and preparedness of our forces,” Vallely said.

“The Defense Department currently does not have a policy to accommodate service members who are seeking an abortion but are stationed in a state that has outlawed abortion. The last thing our military needs is to influence our members of the military on whether to abort a baby or not. This decision further strains the recruiting efforts which are in drastic decline. The military medical organizations need not to be involved or have any focus on the abortion issue. There are other, more viable options for women who get pregnant while serving in the military,” he added.

Vallely asserts that the Pentagon has been under pressure to ensure abortion access is protected wherever troops are stationed.

The pressure would be due to the recent overturning of Roe v. Wade, a decision from 1973 that argued abortion is a constitutionally protected right.

“In a recent letter to the Defense Department, some Senate Democrats are requesting the department outline a plan to guarantee that women seeking abortions in states where the procedure is severely restricted, or no longer legal, are given appropriate time off to travel out of state, guaranteed privacy protections and assured they will not be retaliated against for their decision,” Vallely said, referring to a letter sent by Democratic senators to Defense Secretary Lloyd Austin.

“We determined in early June that we should absolutely allow content categorized as abortion (to be accessible on DOD networks) based on the healthcare aspects related to the category,” a Pentagon spokesperson, Navy Lt. Cmdr. Tim Gorman, told The Military Times.

The ban had been in place since 2010 and was lifted on Wednesday.

As per federal law, the military cannot perform abortions unless the pregnancy was caused by rape, incest or if it puts the life of the mother in danger.

“For now, the Defense Department is continuing to abide by federal laws governing its abortion activities, which restricts abortions to those in which the life of the mother is in danger or in cases of rape or incest,” Vallely added.