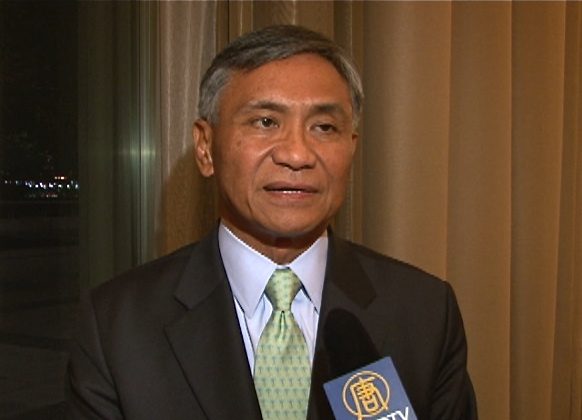 “Wonderfully produced,” said Tony Taguba, a retired major general in the United States Army. “Just absolutely fascinating. I’ve never seen one like this before in my entire life.”

New York-based Shen Yun travels around the world reviving the 5,000-year-old, divinely-inspired Chinese culture, a culture that was nearly decimated by communist rule in China, according to the company’s website.

At the heart of a Shen Yun performance is classical Chinese dance, an ancient system that is both one of the most comprehensive and one of the hardest to master in the world.

“We were just incredibly, you might say, shocked by the, in a positive way, of how beautiful the culture of dance in China has been,” Mr. Taguba said.

“Sophisticated dance techniques, an orchestra joining instruments East and West, beautiful costumes, and a stunning back drop—this is Shen Yun at first glance,” states Shen Yun’s website. “But digging deeper, one discovers a sea of traditional Chinese culture. Mortals and divine beings merge on stage as one. Principles such as benevolence and justice, propriety and wisdom, respect for the heavens, and divine retribution, all come to life, washing over the audience. Originating from Confucianism, Buddhism, and Taoism, these ideals are the essence of traditional Chinese culture.”

“If you look at it from the standpoint of why humanity is so important to China, in terms of respect and dignity, for example, that resonates, should resonate everywhere around the world,” said Mr. Taguba. “It’s a very peaceful feeling. Something that’s, you might say, very soothing, in terms of not just in the meditation side of the house, but emotionally, physically, mentally. I think it has, it sends a message.”

Mr. Taguba is chairman and CEO for Asian Pacific Leadership and Mentors. He was also the second American citizen of Philippine birth to be promoted to general officer rank in the Army.

One dance that stood out to him was Martial Arts Training Ground, where “soldiers gather to hone their skills,” according to Shen Yun’s program book, “their movements flow like water but are as solid as rock.”

“It brought back some memories for me when I went to Korea,” said Mr. Taguba, “and where we had to train in tai kwon do.”

Yet Shen Yun is “not just for the army,” but also “for the public at large,” said Mr. Taguba. “The most important thing is understanding China’s culture through dance, and it’s very valuable whether you’re in the military or whether you’re a civilian, or just an ordinary citizen. Here in the United States, we have many, many nationalities. We have Hispanics, African-American, Chinese-American, of course, Japanese-American, just a multitude of ethnicities. And I think they should see the show.”