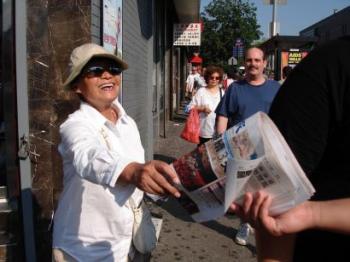 Seventy-year-old Ms. Dai Keyue is a volunteer newspaper deliverer in Flushing. (The Epoch Times)
US

This is why she is on the streets clarifying the truth. She said she hopes people will not allow themselves to be used by the Chinese communist regime.

Ms. Dai is over 70 years old, but her mind is very clear and coherent.

Before her retirement, she taught English as an associated professor in China’s Nankai University.

Ms. Dai’s grandmother and mother were both devout Buddhists, and she has had a strong faith since a young age. She said through practicing Falun Gong, her belief in the Buddha Law has continued to strengthen.

After the CCP’s crackdown on Falun Gong in 1999, all the practitioners in her neighborhood were imprisoned but she escaped China and resettled in the United States.

Mrs. Dai said her health used to be very poor and her friend had recommended she try Falun Gong to improve her health. She said that she completely regained her health after practicing for only one month.

She said in the past she had a fiery personality, her speech often offended people, and she was considered a very strict teacher. After practicing Falun Dafa, she began to assimilate herself to the principles of Truthfulness, Compassion, and Forbearance, requiring herself to think of others before speaking and acting.

Ms. Dai said her father used to be part of the CCP’s underground network, and was sent to Beijing when the CCP came to power.

Her uncle, a successful capitalist in Shanghai, was planning on moving to Hong Kong after the CCP seized power in 1949. But Ms. Dai’s father asked him to stay, believing that the nation’s bourgeoisies would be protected by the CCP. She said he made a huge mistake when he decided to stay.

“My father was very intelligent, but he did not understand the true nature of the CCP. He believed whatever he was told even though they are far from being truthful.” Ms. Dai said.

Ms. Dai said that her family, herself, and her relatives have all experienced the CCP’s tyranny firsthand.

Her father, a powerful official, attempted suicide because the CCP pressured him so badly. He jumped into the river and was rescued be a passing fisherman.

In the end, her family life calmed down. When father died, his casket was covered by the communist flag but she did not feel grateful to the CCP and said she completely sees through the CCP’s mask.

For people who work for the CCP Ms. Dai asks, “Liu Shaoqi and Peng Dehuai were killed by the CCP so easily. What do you think will happen to the common man? Do you really think that the CCP will do anything to help you? The Chinese people who moved to the United States are the ones who disliked the CCP. What makes them think it’s good again?”

Ms. Dai said she hopes that passing Chinese can stop once in a while, take a newspaper, listen to the truth, and not be misused by the CCP again.