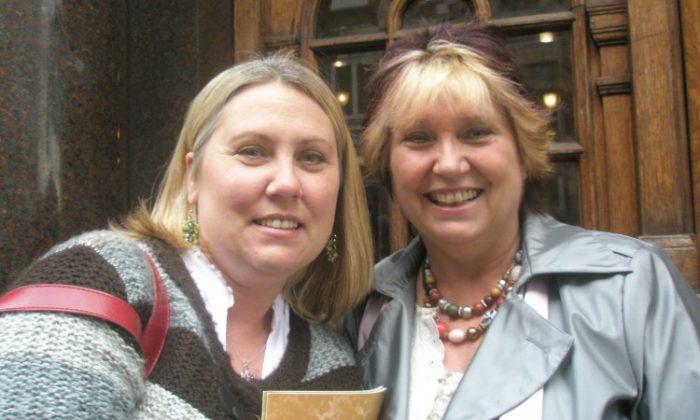 LONDON—Shen Yun held its third performance at The London Coliseum on Saturday afternoon, April 14, in front of a full house.

Amanda Hazell, a retired sales manager from London went to see Shen Yun with her daughter Simone Ford and found the “whole thing breathtaking”. In fact, Ms. Hazell had quite a unique and extraordinary experience during the show and lauded the spiritual core at the heart of Chinese culture.

“It’s absolutely magnificent. I’ve been crying most of the way through it because it’s so beautiful and so moving,” she said. “I think the costumes are wonderful, the performance is stunning, the whole thing is breathtaking, beautiful, and very, very spiritual, which is why I’ve been crying so much.”

Shen Yun was established in 2006 with the mission to revive the 5,000 years of Chinese culture. The performance includes classical Chinese dance, ethnic dances, a live orchestra combining Eastern and Western instruments and techniques, an animated digital backdrop, and detailed costumes to provide the audience with a complete impression of Chinese culture.

Ms. Ford, who has two children, found a deeper meaning in some of the pieces that appear light-hearted and colourful.

“It puts it into perspective how the world is,” she said. “What we’ve seen today is so simple, so elegant, beautiful.”

She said that the performance on stage shows that things can be “so beautiful”.

“People had so little but were very happy with what they had and everybody pulled together as a team of people, whereas now everybody is very singular and they look out for themselves.

“It makes you wonder why the world is the way it is today,” she said.

According to Shen Yun’s website, each performance presents “the deeper spiritual core of the ancient culture, with its values of benevolence, honour, propriety, wisdom, and sincerity, as well as a reverence for the gods and the heavens”.

Shen Yun presents story-based dances to retell ancient legends and classical tales that embody these values. Some, set in modern-day China, explore themes of courage, compassion, and divine intervention through the story of the persecution of the spiritual discipline of Falun Gong.

Ms. Hazell was touched by the final programme, Before Disaster, the Divine is Rescuing. “There’s such a big message in it for everybody to understand, with the conflict, the fighting, just simple people standing up for their rights against evil … that came across and that was very emotional.

“You knew that innocent people were dying for something they believed in.”

Shen Yun’s mission to revive the 5,000 years of ancient Chinese civilization was not lost on Ms. Hazell. She said “the story of China’s history, to be shown it in something like this, it’s a wonderful way of learning about the culture, the history. It’s just amazing, absolutely amazing.”