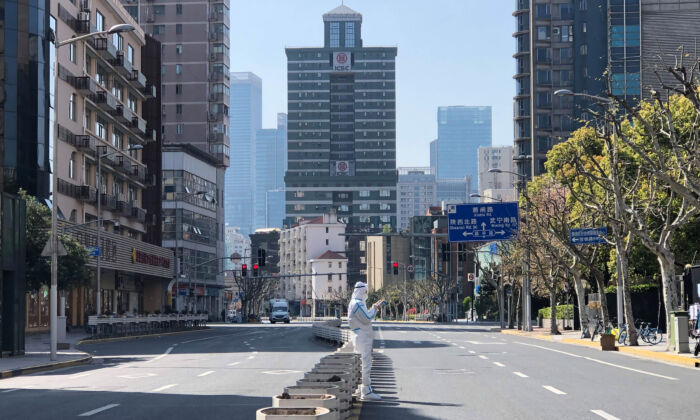 A worker in protective overall stands in the middle of empty streets in a lockdown area in the Jingan district of western Shanghai on April 4, 2022. (Chen Si/AP Photo)
INSIDE CHINA

Retired Professor Dies After Not Receiving Care in Locked-Down Shanghai

A retired Shanghai professor died after hours of desperately seeking care without success, in what’s being seen as another non-COVID death attributed to the city’s strict lockdown, according to a former colleague.

Prof. Yu Huizhong at Shanghai-based Fudan University died, aged 79, on April 15, after experiencing a 4-hour wait for medical care, according to an online statement made by his former colleague Qu Weiguo.

“[It was] as long as four hours of seeking care across the city,” wrote Qu, the ex-principal of the College of Foreign Languages and Literatures. “What a torment for Professor Yu and his family!”

The colleague accused the local authorities of failing to maintain regular care for non-COVID patients during the containment, deeming “relevant policies” as barriers against health care workers looking after the ill.

The college confirmed Yu’s death in an April 16 obituary on its official site but did not detail the cause of passing.

Yu’s death is not an isolated case with reports of non-COVID deaths surfacing on social media platforms.

The victims include violinist Chen Shunping, who committed suicide due to denial to care for an unendurable acute pain in the abdomen, and securities veteran Wei Guiguo who died from delayed access to care following a cerebral hemorrhaging.

Another retiree, Wu Zhongnan, 78, from Shanghai Jiaotong University, died on April 9 after waiting for two and half days for proper treatment at the Renji Hospital’s emergency room, according to internet user “Zheng Zong Shanghai Ning,” who identified himself as the son of the deceased.

Nurses told the son they lacked adequate medical equipment, health care workers, and beds. The emergency room has a capacity of 50 but had more than 150 patients, according to the son. Even worse, he found the room included both positive and negative cases, adding to the risk of infection.

A list maintained and updated by some Shanghai residents on non-COVID deceased people in the city, keeps increasing, said New York City resident and acupuncturist He Anquan.

“The actual death toll must be much higher than the current one known because some families fear reprisals or political persecution from authorities if they air the truth,” He told The Epoch Times on April 18. “I assume it might add up to 3,000.”

The Epoch Times cannot independently verify the figure due to a lack of transparency in China’s data on COVID cases.

He—who was born and raised in Shanghai—said he could obtain credible reports from his relatives and friends back in the Chinese financial hub. He also gathers information from some 1,500 members in his chat group on Club House. The members of the chat group live in various parts of the world, including his home city, and all speak the same Shanghai dialect. They’re all likewise concerned about Shanghai people under one of the world’s strictest lockdowns.

“The humanitarian crises from the zero-COVID policy have far exceeded the damage incurred by COVID-19 itself,” he said. “Given the highly transmissible Omicron variant, China’s dynamic zero-COVID is an impossible mission.”

Additionally, the NYC resident said he is collecting signatures for a petition, which he will submit to the United Nations and U.S. lawmakers in hopes of seeking assistance for those still sealed in his hometown.