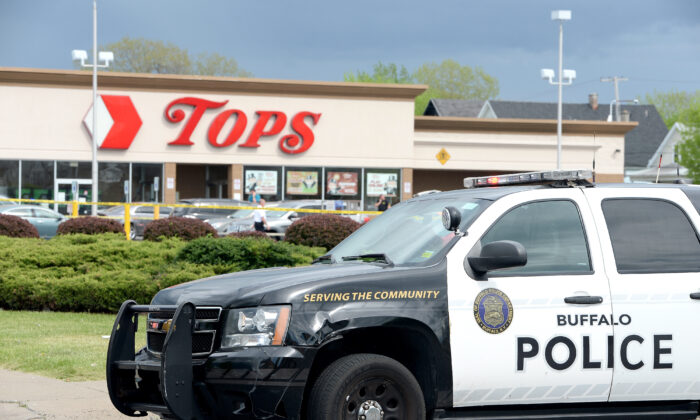 Police on scene at a Tops Friendly Market after a mass shooting at the store in Buffalo, N.Y., on May 14, 2022. (John Normile/Getty Images)
Crime and Incidents

A retired police officer who was killed during a mass shooting in Buffalo, New York, on Saturday was described as a “hero” by local officials.

Retired Buffalo Police officer Aaron Salter was killed at Tops Markets store when he was attempting to protect others from the alleged gunman, 18-year-old Payton Gendron, officials said.

“Today is a shock,” his son, Aaron Salter III, told the Daily Beast. “I’m pretty sure he saved some lives today. He’s a hero.”

Buffalo Police Commissioner Joseph Gramaglia said Salter is “a hero in our eyes.” Officials said that Salter, who was working as a security guard at the grocery store, drew his gun and fired at Gendron, but his bullets could not pierce the suspect’s armored tactical gear.

“One of the individuals inside the store is a security guard, a beloved security guard, who is a retired Buffalo police officer” and “he engaged the suspect and fired multiple shots,” Gramaglia said during a news conference.

“I had the pleasure of knowing him, great guy, well respected, well-liked. This is just horrific. It’s tragic. I don’t know what other words to describe it,” Buffalo Police Benevolent Association President John Evans also said, according to WIVB-TV, adding that the department has reached out to Salter’s family to offer its condolences.

Gendron, meanwhile, was charged with first-degree murder and pleaded not guilty on Saturday. According to a manifesto that was allegedly written by the suspect, he described himself as a white supremacist who was specifically targeting a location to kill black people, while he also suggested that he was encouraged to carry out an attack in New York because of the state’s strict gun laws around magazine capacity and semi-automatic rifles, while claiming to have illegally modified a rifle to carry out the shooting.

Federal authorities were still working to confirm the authenticity of a 180-page manifesto that was posted online, which detailed the plot and identified Payton Gendron by name as the gunman, officials said, according to The Associated Press.

Police said Gendron shot, in total, 11 black people and two white people Saturday in a rampage that the 18-year-old broadcast live before surrendering to authorities. Screenshots purporting to be from the Twitch broadcast appear to show a racial epithet scrawled on the rifle used in the attack.

Buffalo Mayor Byron Brown told churchgoers that he saw the former fire official at the shooting scene Saturday, looking for his mother.

“My mother had just gone to see my father, as she does every day, in the nursing home and stopped at the Tops to buy just a few groceries. And nobody has heard from her,” Whitfield told the mayor then. She was confirmed as a victim later in the day, Brown said.