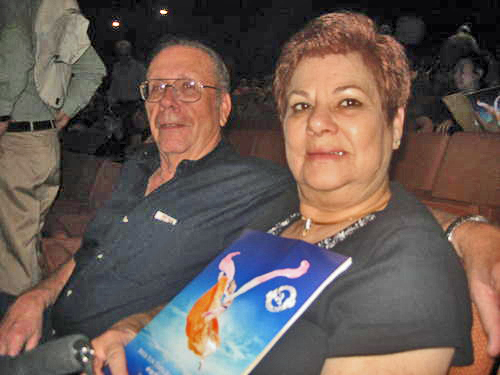 Established in 2006, New York-based Shen Yun is a non-profit organization committed to bringing China’s divinely inspired culture to life through the performing arts. Having reached millions of people across nearly 20 countries and over 100 cities, Shen Yun is now widely regarded as an international phenomenon.

“I like the dancing, the choreography,” Mrs. Bethel added.

According to the Shen Yun website, “Classical Chinese dance has helped preserve 5,000 years of Chinese culture. Built on traditional aesthetics, it was once passed down among the people, in imperial courts, and through ancient plays. Over thousands of years, it was constantly refined, eventually developing into the vast and distinctly Chinese dance form we know today.”

“It’s different than what I’m used to, that’s for sure,” she said.

One of Mrs. Bethel’s favorite aspects of the show was the costume design.

As the website states, “Shen Yun’s costume artists collect countless designs of traditional attire, ranging from those of emperors, ministers, and generals to the everyday clothing of the common people. They use bright colors to tailor and recreate hundreds of new pieces each season. Every detail is given meticulous attention and is a result of artistic inspiration and careful polishing.”

Mrs. Bethel’s husband, a retired accountant, was also very impressed with the performance.

Mr. Bethel said that he would recommend Shen Yun to anybody.

“Well it’s simply something we’ve never seen before,” he explained. “I wish I had brought my seven-year-old granddaughter to see the dancing.”