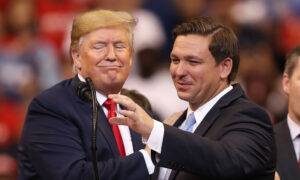 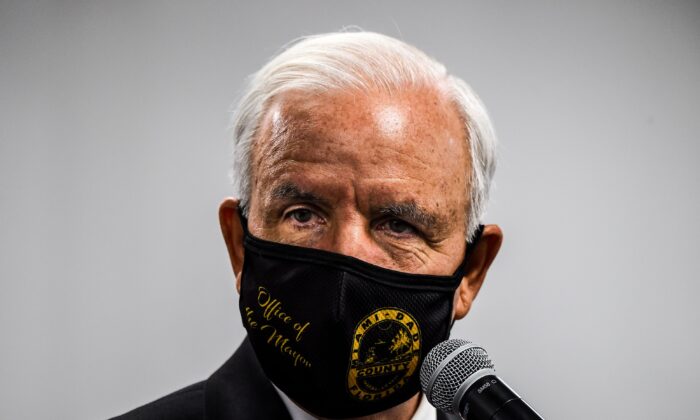 Miami-Dade County Mayor Carlos Gimenez wears a mask during a press conference to address the rise of CCP virus cases in the state, at Jackson Memorial Hospital in Miami on July 13, 2020. (Chandan Khanna/AFP via Getty Images)
2020 Election

Republican Miami-Dade County Mayor Carlos Gimenez has beat a single-term Democrat in Florida’s 26th Congressional District, according to The Associated Press, flipping a seat that has frequently shifted between the two parties.

Gimenez, a retired firefighter and mayor since 2011, defeated Rep. Debbie Mucarsel-Powell (D-Fla.) in a district that stretches from the Miami suburbs to Key West.

“I wouldn’t be here without the people behind me,” Gimenez said in an acceptance speech outside his home on Tuesday night, referring to his family, friends, and volunteers who stood behind him.

Gimenez, who was endorsed by President Donald Trump, made restoring the economy amid the CCP (Chinese Communist Party) virus pandemic one of his top campaign issues. Mucarsel-Powell also stressed recovery from the pandemic as a major priority.

He sought to link his first-term rival to Washington liberals and label her a socialist in the district, which includes a part of Miami-Dade County and Monroe County.

“When I first ran for mayor, they didn’t think I was going to win that, too,” Gimenez said in a statement. “I promise you I’ll be a much more effective congressperson and reach across the aisle.”

Mucarsel-Powell initially refused to concede, saying all votes should first be counted. The Associated Press called the race for Gimenez at 10:13 p.m.

“This election has seen historic levels of turnout in Florida and across the nation, and we are still waiting for all the votes to be counted,” Mucarsel-Powell said in a statement. “What we are seeing now is our democratic process at work. I look forward to a final result when the votes have been counted and everyone’s voice has been heard.”

Mucarsel-Powell, the first person from Ecuador to serve in the U.S. Congress, won the seat two years ago over then-incumbent GOP Rep. Carlos Curbelo (R-Fla.). She and her allies spent millions on television adverts branding her rival as “corrupt Carlos,” the Miami Herald reported.

“I’m going to work with Congress to bring solutions, to bring results,” Gimenez added, noting that he will work to prioritize the economy and protect health insurance.

“We can’t restore our environment unless we have a strong economy,” he said. “The one thing about me is I love to learn and I’m a quick learner.”