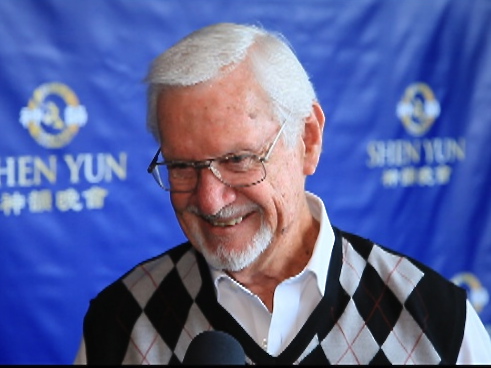 Mr. Oftstedahl attended Shen Yun with his wife, Sherrill. Both are interested in China, having visited the country and also studied the different dynasties.

Shen Yun’s mission is to bring to life 5,000 years of divinely inspired civilization through stories told by traditional dance, music, and song. Shen Yun artists portray different aspects and stories of Chinese culture, ranging from the ancient past to modern times.

Both Mr. and Mrs. Oftstedahl were impressed by how different Shen Yun is from other shows. “Very unique, one of a kind, right?” said Mr. Oftstedahl.

“Classical Chinese dance is at the heart of what Shen Yun does. Known for its incredible flips and spins, and its gentle elegance, it is one of the most rigorous and expressive art forms in the world,” states the Shen Yun website.

What really caught Mrs. Ofstedahl’s eyes was the digital backdrop, which supports each dance piece, setting a scene, whether it be the mountains of Tibet or a heavenly paradise. In particular, “the timing where they go back into the future,” she said. Shen Yun dancers create a unique effect by interacting with the screen, appearing to jump from or onto the screen.