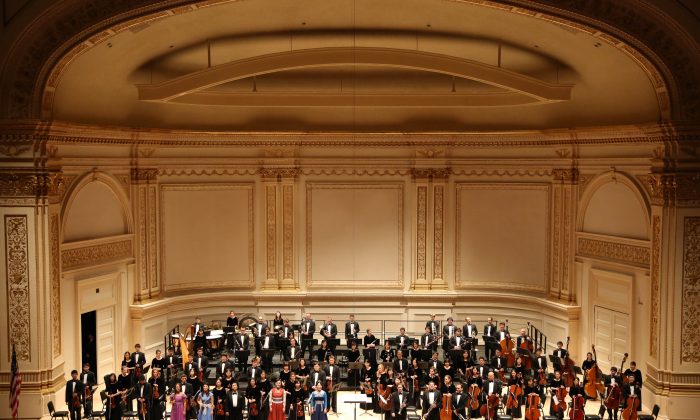 NEW YORK—Shen Yun Symphony Orchestra uniquely combined Eastern and Western music at Carnegie Hall Saturday, much to the pleasure of retired Colonel Baron and his wife.

“It was the most outstanding performance that we have ever seen,” said the colonel, who attended the afternoon performance on Oct. 5.

Mrs. Baron was also enthused. “It was wonderful, just from beginning to end,” she said.

The orchestra performed its own original pieces, as well as masterpieces by Western composers such as Beethoven and Tchaikovsky.

The quality was second to none, according to the Colonel. “Perfectly orchestrated. Perfectly,” he said, adding that he would definitely come again next year.

“This is my second time coming to a Shen Yun performance and I think it was amazing,” said Mr. Perez. “I like the orchestra, I like the trumpets, and I like that music where you seem like you’re going to war—such action music—and I love those pieces.”

Perhaps Mr. Perez was referring to Beethoven’s Egmont Overture, which was composed during the Napoleonic wars and tells of the heroism of 16th century Flemish general Egmont.

“I think it’s marvelous,” she said. “For me it was smooth, … very easy to listen to. He enjoyed the beat, I enjoy the melody.”

Mrs. Perez also liked the combination of Western and Chinese music in the performance.

“I love it, it’s very traditional. It reflects a lot of history of the nation, so I think it’s amazing to hear as well,” she said.