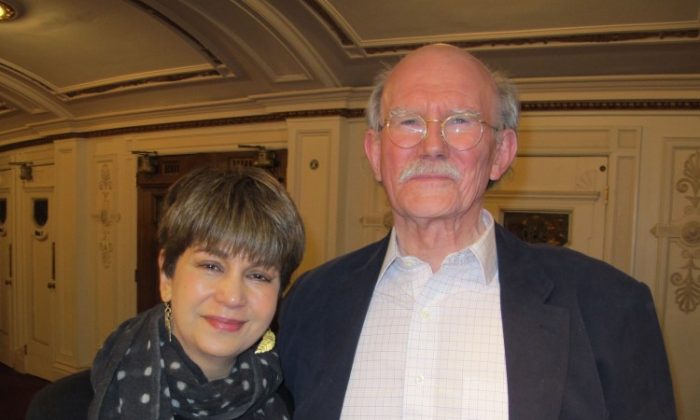 Retired business owner Tony Alers-Hankey and his wife Parvin praised the Saturday matinee of Shen Yun at the London Coliseum on April 14, 2012. (The Epoch Times)
News

Retired business owner Tony Alers-Hankey and his wife Parvin praised the performance by the Shen Yun Performing Arts International Company, one of three companies that tour the world simultaneously each year.

“I thought it was actually spectacular, they are very energetic,” Mrs. Alers-Hankey said, adding, “The costumes were beautiful, and they looked so happy! And as if they enjoyed it, which is marvellous.”

She particularly enjoyed the combination of graceful moves with the more dramatic leaps and tumbling techniques that characterise classical Chinese dance.

She went on to say that she “could see ballet coming from this, rather than the other way round”, and was struck by the depth of talent among the dancers, saying, “Here, everyone seemed equally talented.”

He also said that “credit should be given to the people who designed the different concepts and also translated it into the costumes and dance. For example, the snowflake [dance] was a very innovative thing, very imaginative.”

Mr. Alers-Hankey was referring to the dance Snowflakes Welcoming Spring, in which “dancers take small, quick steps through snowy fields as they skilfully spin and twirl sequined handkerchiefs”, according to the Shen Yun programme book.

He also praised the piece Lotus Leaves, in which the “dancers’ unique full-circle fans sway like lily pads in the wind, evoking scenes of a flowering lotus garden in the summertime”, according to the programme book.

New York-based Shen Yun Performing Arts’ mission is to revive 5,000 years of divinely-inspired Chinese culture through classical Chinese dance and music, according to its website. Each performance presents “the deeper spiritual core of the ancient culture, with its values of benevolence, honour, propriety, wisdom, and sincerity, as well as a reverence for the gods and the heavens,” states the company’s website.

Shen Yun uses story-based dances to retell ancient legends and classical tales that embody these values. Some, set in modern-day China, explore themes of courage, compassion, and divine intervention through the story of the persecution of the spiritual discipline of Falun Gong. Mrs. Alers-Hankey commented on this, saying, “It was telling a story which is very pertinent and important.”