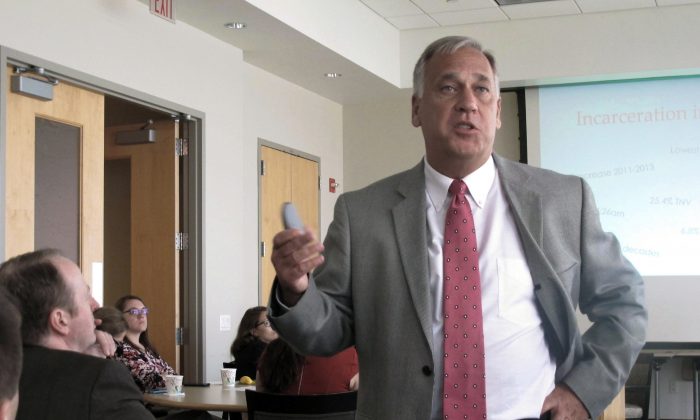 Gary Mohr, director of the Ohio Department of Rehabilitation and Correction, discusses efforts to reduce the state's prison population, in Columbus, Ohio, on Aug. 13, 2015. As states rethink the use of solitary confinement to punish unruly inmates, the American Correctional Association is reshaping national accreditation standards to ease such procedures. Mohr and Rick Raemisch, the Colorado prisons director, are developing the new American Correctional Association standards based on changes they’re pushing at home. (AP Photo/Andrew Welsh-Huggins)
US

Proposals range from mandatory health care visits and mental illness treatment for inmates in segregation to more time out of cells for recreation and education.

“The punishment that we give to Americans is deprivation of their liberty, but it doesn’t mean that we try to punish them more while their liberty is deprived,” said James Gondles, executive director of the American Correctional Association.

In Michigan, the state’s 7-year-old Incentives in Segregation program has led to reductions in misbehavior by inmates whose good behavior is rewarded with privileges in a step system.

Last month, New York prison officials agreed to overhaul their use of solitary confinement, offering a broad slate of reforms aimed at reducing the number of inmates sent to “the box.” In September, California said it would end its unlimited isolation of imprisoned gang leaders, restricting a practice that once kept hundreds of inmates in notorious segregation units for a decade or longer.

Also in September, the Association of State Correctional Administrators issued a report calling prolonged isolation of inmates in jails and prisons “a grave problem in the United States.”

Prolonged isolation of inmates in jails and prisons is ‘a grave problem in the United States.’
— Association of State Correctional Administrators

Critics of rigid solitary confinement say it’s a dehumanizing form of punishment that increases inmates’ anxiety and anger, strips them of social contact necessary to interact safely with others, and makes it harder for inmates to integrate back into the general prison population and, upon release, society.

Inmates sent to solitary should be prisoners “we’re afraid of, not mad at,” said Gary Mohr, director of the Ohio Department of Rehabilitation and Correction.

Mohr and Rick Raemisch, the Colorado prisons director, are developing the new American Correctional Association standards based on changes they’re pushing at home.

Fewer Than 100 Guantanamo Prisoners Left as 10 Leave to Oman

Ex-Ohio inmate Johnny Hairston says anything is better than the traditional approach to segregation.

Hairston, 59, said he spent many days “in the hole” during 15 years in and out of several Ohio prisons on drug trafficking, forgery and robbery charges. Usually he was sent down for fighting, he says.

“I’d always identify myself as the animal,” said Hairston, now a security guard at a Columbus social services agency. “Once you go to the hole, it’s like becoming that animal that people go to the zoo to see.”

I’d always identify myself as the animal. Once you go to the hole, it’s like becoming that animal that people go to the zoo to see.
— Johnny Hairston, ex-Ohio inmate

At Belmont Correctional Institution in eastern Ohio, the state is looking at alternatives to the old concept of solitary as “the jail within the jail.”

In the past, inmates caught using drugs could wait weeks before learning whether they’d end up in solitary. Once there, they stayed in small cells for 23 hours a day with a short break spent in only a slightly bigger holding area for bare-bones recreation like using a pull-up bar. Inmates often just spent their time talking to fellow solitary prisoners.

Today, a streamlined system removes such rule breakers from the general prison population much faster. And instead of ending up in a tiny cell with no privileges, they’re housed in a separate, dormitory-style wing and given the chance to take substance abuse programs and other classes. A 90-day sentence can be reduced by a month if inmates accept the educational opportunities.

In 2016 Campaign, Both Parties Want Reform in Justice System

Inmates sent to solitary for bigger offenses, like fighting, are still housed in traditional solitary cells but are also given access to classes and counseling out of their cells—unheard of in the past. Ohio is testing the idea of enhanced solitary at a few other prisons around the state.

The change in philosophy has led to a decline in inmates returning to segregation, Belmont warden Michele Miller said.

“When you let them back out, it was kind of a crap shoot on whether they were going to violate rules again or not, because we had taken all pro-social activity away from them in segregation,” she said.

The goal is preventing new victims of crime by focusing on inmate rehabilitation, including their time in solitary, Raemisch said.

“I don’t see my mission as punishing someone once they get to prison,” he said. “Anybody that’s been through a prison knows just being there is punishment enough.”