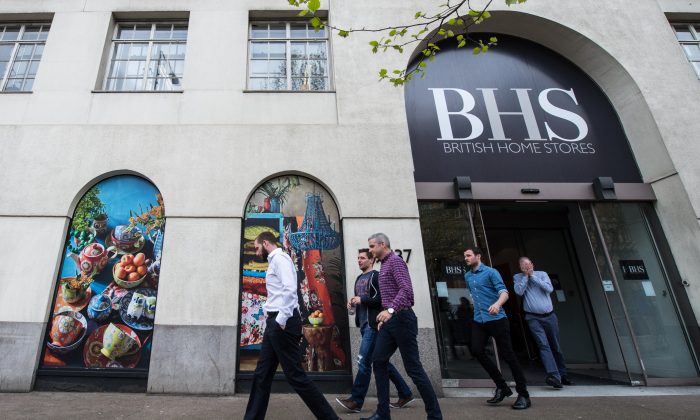 LONDON, ENGLAND—High street retailer British Home Stores (BHS) employees leave the BHS headquarters, where staff were told on April 25th, 2016, that the company will go into administration, threatening almost 11,000 jobs. BHS currently has 164 stores across the UK since it opened its first store in 1928. (Chris Ratcliffe/Getty Images)
Business & Economy

British department store owner BHS called in outside help on Monday, April 25th, to help prevent closure and avert the loss of 11,000 jobs in the biggest retail failure since Woolworths went bust in 2008.

The 88-year-old chain has failed to keep pace with traditional rivals such as Marks & Spencer selling clothing and homeware in stores and online, resulting in a significant loss of market share.

“The group will continue to trade as usual whilst the administrators seek to sell it as a going concern,” administrators Duff & Phelps said in a statement.

BHS has also suffered from the booming popularity of British discount clothing retailer Primark and Spanish-owned brand Zara, and from the rapid expansion of supermarket giants like Tesco and Asda into fashion.

BHS, which also sells food, has been undergoing restructuring but has been unsuccessful in negotiations to find a buyer, while property sales have not materialised as expected, Duff & Phelps added.

“Consequently, as a result of a lower than expected cash balance, the group is very unlikely to meet all contractual payments,” the administrators said.

“The directors therefore have no alternative but to put the group into administration to protect it for all creditors.”

The current situation “was a combination of bad trading and not being able to raise enough money from the property portfolio”, he added.

BHS has debts totalling more than £1.3 billion, including a £571-million pension fund deficit that proved a major stumbling block in rescue talks.

Neil Saunders, head of retail consultancy Conlumino, added that Monday’s announcement ends “a long period of decline which has seen the chain fall out of favour with British shoppers thanks to its failure to respond to changing tastes and the intensification of competition [from rival stores] on the high street”.

“Fifteen years ago … BHS attracted some 13.4 per cent of all clothing shoppers through its [British] doors.

“Although not all of these visitors would use BHS as their main store, many would buy one or two products – helping BHS attain a respectable 2.3-per cent share of the clothing market.

Saunders added that last year, BHS pulled in only 8.2 per cent of all clothing shoppers, handing it a 1.4-per cent share of the clothing market.

Sophie McCarthy, an analyst at Verdict Retail, said: “BHS is an exemplar model of what happens when a retailer fails to take risks and try something new.”

“Verdict research shows that post-austerity consumers are more cautious with their money, even as economic pressures have begun to ease,” she said.

Starting in 1928 with a chain in London, BHS has grown to stand at 164 stores and 74 franchise operations across 18 countries including Russia and the former Soviet Union and the Gulf states.

Julie Palmer, partner at insolvency firm Begbies Traynor, said it looked “increasingly unlikely that any buyer will be brave enough to salvage the business in anything like its current form”.