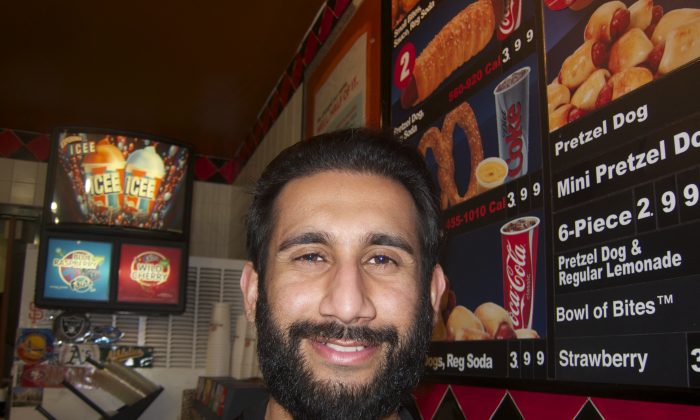 Osman Khan, of Hayward, commutes over forty miles to his cashier job at Pretzelmaker because jobs are hard to come by in his city. (Chun Lee/Epoch Times)
Northern California

Hopeful, determined, and persevering may not be words you would have chosen to describe the coffee shop or fast-food worker that served your morning latte or lunchtime hamburger. But this is the attitude of many in a marginalized group of retail workers in the Bay Area who struggle to make ends meet and to maintain a stable living situation for their families.

Bay Area housing costs have long outpaced those of the rest of the nation, making the lives of retail workers more difficult than in other places. Massive growth in the job market has brought thousands of new workers to an area already short on housing, and it has pushed current housing prices beyond the peak of 2006.

A one-bedroom apartment can rent as high as $2,600 in some cities. Many retail workers have had to make more sacrifices than ever to allow them to stay in the Bay Area.

One retail worker suffering the effects of skyrocketing rent is Juan Licona, a 33-year-old assistant manager at Burger King, who’s supporting a wife and three kids on minimum wage.

He currently rents two rooms in his sister-in-law’s house for $1300 a month, nearly all of Licona’s monthly earnings. He collects cans on the side to supplement his income.

“I worked for the same boss for 13 years,” He says proudly, referring to his years at Burger King, without a hint of resentment. Licona smiles warmly to guests as he hands out bags filled with hamburgers, chicken nuggets, and fries at the end of a long shift.

“I love my kids, my family,” says the fast food manager, his eyes lighting up as he talks about his three kids ages 9, 7, and 3. He hopes someday his children will be able to live out their dreams, but he wonders how he will pay for sky-high tuition fees.

Soaring rent prices are forcing many in retail to move back in with family members or delay moving out of their parents’ homes. Many also commute long hours to minimum wage jobs to make ends meet.

So Why Stay in the Bay Area and Struggle?
“There’s cheaper places, but then there’s hardly any work,” says Mareya Valenzuela, a 26-year-old salesperson at Footwear etc. for the past five years. A Bay Area native, Valenzuela currently lives at home in San Jose with her family.

When asked if she is considering buying a home in San Jose, she laughs. “No way. Too expensive, way too expensive. Even apartments are ridiculous! This job isn’t going to cover a house or anything like that.”

Osman Khan, cashier at Pretzelmaker for the past six years, commutes over an hour to the South Bay from Hayward, where he lives with his parents.

“It’s a travel for me, but jobs are kind of tough in the East Bay right now,” he says.

Leaving the congested streets of Mumbai for better opportunities in the United States, Khan and his family have traveled a long and arduous road. “We’re from India. We came here because we were in a bad situation.”

“I am just a hard worker, trying to support my family,” he says. “I try to help them out as much as I can. My dad is disabled, but my mom’s a preschool teacher.”

The 24-year-old business management graduate of Foothill College lives at home to help his family with finances and because he cannot afford to rent on his own. He hopes to someday work as an engineer at a large corporation like HP, Apple, or LinkedIn.

Small business owners are also facing similar challenges with housing. Some have had to move back with family at an age when many peers are enjoying stress-free retirements funded in part by sizable home equity.

“It’s a nice place to live if you can afford it,” said John Hammer, a good-natured man in his late 50s and co-owner of Toys Sports Cards in Cupertino. Hammer rents a room from his brother-in-law in San Jose.

“You think about [buying a home], but not seriously. You definitely have to have a better job than I have here to do that.”

“Everything is a little more expensive here,” he said, “but mostly it’s the housing that puts people out. The other higher prices you can usually deal with.”

Hammer opened his toy store out of a passion for toys and a need to be his own boss. He has seen many of his loyal customers grow up into adults. “I like buying and selling toys; it’s a good job for me.”

Transplants the New Normal?
The very makeup of the housing and rental market is changing, with many newcomers working in the tech industry, brought in by companies’ seemingly endless appetite for new talent, driving demand for housing to historic new levels.

Neighborhoods close to tech hubs have seen a particularly notable spike in prices.

Stacey McCool, barista and shift supervisor at Starbucks and native of the Bay Area, has witnessed the trend firsthand.

“Definitely a different mixture of people, especially around here. Not a lot of people who are from here.”

She describes most of her customers as people “who moved over here and trying to work—kind of coming in, or a transplant, as they call them. Very few that I’ve found that have been around for a long time.”

McCool, who has lived in New York and Santa Cruz, found herself back in the Bay Area when her motor home happened to break down in San Jose. She ended up renting a room off Craigslist.

“The [rent prices] were very drastic, depending on even a couple of blocks, depending on where you were in San Jose vs. Saratoga or Cupertino, just finding those different neighborhoods that you could afford and staying within them,” says the Starbucks barista. “Its kind of odd how close they were and how much of a price increase the difference was.”

Though her current living situation is not ideal, McCool ends her story on a positive note.

“It was kind of fun getting to know strangers,” she says, laughing.