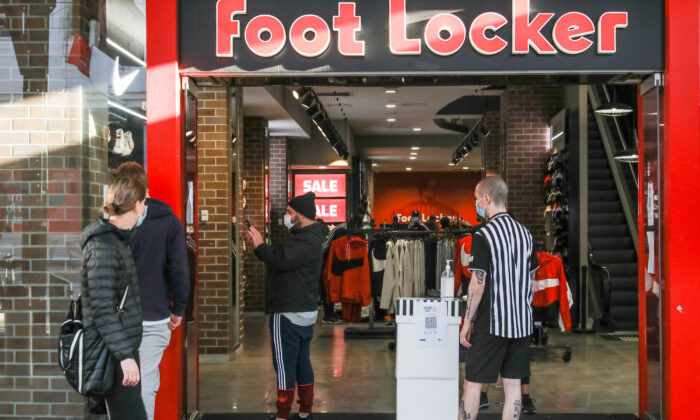 A shopper is seen checking into a Foot Locker store in Melbourne, Australia, on Oct. 29, 2021. (Asanka Ratnayake/Getty Images)
Australia

According to the Australian Retailers Association (ARA), retail workers have experienced an increase in verbal and physical assault just days after the Victorian state government made it mandatory that only those fully vaccinated against COVID-19 can access non-essential retail premises.

ARA CEO Paul Zahra said that the organisation had received reports of one worker who was beaten up, another worker who was scalded by coffee, and one who had a shopping trolley thrown at them.

“Our members have reported thousands of incidences of customer aggression including many acts of significant violence towards retail staff,” Zahra said in an open letter to state Premier Daniel Andrews on Nov. 23.

“The reports of customer aggression are coming from a broad range of retailers—from department stores to hardware stores, along with small businesses and even charity shops, many of which have had to put security guards at their doors.”

Zahra said that while customer aggression had increased during the pandemic, over the last week, the problem had reached “peak levels,” resulting in many staff becoming fearful of returning to work.

The letter discussed how retailers and customers had been taken by surprise by some of the mandates—including the rules for vaccinating children—which meant business owners weren’t prepared with adequate signage and training material to assist customers and staff.

“Retailers were further blindsided by the bringing forward of staff vaccination requirements from the previously legislated date of Nov. 26 for a second dose to Nov. 19—without any warning,” Zahra said.

“These requirements were introduced with very little information on the record and without the provision of a public health order until the day of the legislation coming into place,” he said.

“There was the added complexity of the published public health orders contradicting each other around the required dates for staff vaccinations in ‘non-essential’ retail.”

Zahra said small businesses had no hope of interpreting these messages without a lawyer, which only larger businesses could afford.

The ARA CEO said his organisation couldn’t get clarity from the government department about the staff vaccinations until the evening of Nov. 19, which Zahra said was contradictory and required updating retailers and causing more stress.

“Last Thursday, in the midst of Black Friday preparations, retailers were required to pivot their business focus on the immediate requirement for vaccine checking—with only a few hours notice given by the Victorian government,” Zahra said.

“For many retailers, this entailed recruitment or rostering of [COVID-19] marshalls for one or several entrances. Not only was this at great cost to retail, but it also meant finding additional staff with limited preparation time.

“Retail rostering happens days and usually weeks in advance—in many instances required by law,” he said.

The Victorian government has refused to consider changing the rules despite the upswing in violence towards retail staff.

The Age reported on Wednesday that the Victorian Attorney-General Jaclyn Symes said the vaccine requirements around non-essential shopping would not be relaxed.