Retail Sales in America Plunge to Record Low in March

'Many businesses are operating on a limited capacity or have ceased operations completely,' says Census Bureau 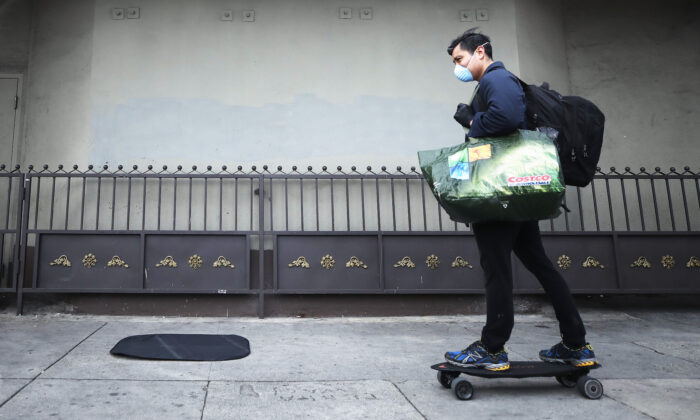 A man skates on the sidewalk while wearing a mask and carrying bags in Los Angeles, California, on March 20, 2020. (Mario Tama/Getty Images)
By Tom Ozimek

U.S. retail sales suffered a record drop in March as the COVID-19 outbreak forced businesses to close and people to shelter indoors, setting up consumer spending for its worst decline in decades.

“Due to recent events surrounding COVID-19, many businesses are operating on a limited capacity or have ceased operations completely,” the Census Bureau said in its advance retail and food sales report, published April 15 (pdf).

The Bureau said advance estimates of retail and food services sales for March came in at $483.1 billion, a drop of 8.7 percent from the previous month. This is the biggest decline since the government started tracking the series in 1992.

The figures are adjusted for seasonal variation and holiday and trading-day differences, but not for price changes.

The biggest month-over-month drop was in clothing and clothing accessories, which plummeted by 50.5 percent in March. Compared to a year earlier, sales in this category fell by 50.7 percent.

“The economy is almost in free fall,” said Sung Won Sohn, a business economics professor at Loyola Marymount University in Los Angeles. “We will see the bottom when the coronavirus infection rates stabilize. It’s going to be a pretty deep bottom from which to come up.”

While food services and drinking place sales fell by 26.5 percent in March compared to February, grocery stores saw a surge in month-over-month sales in March, spiking by 25.6 percent.

The increase in grocery store sales may be associated with multiple reports of panic buying amid fears of shortages and lockdowns due to the Chinese Communist Party (CCP) virus, commonly known as the novel coronavirus.

“In general consumer spending is going to look about as bad as it has ever been, although there will be some categories of resilience,” said Tim Quinlan, a senior economist at Wells Fargo Securities in Charlotte, North Carolina. “The panic buying at grocery stores cannot offset the retrenchment in spending that we will see in other categories.”

Economists have made bleak predictions for consumer spending in the second quarter, with estimates as low as a 41 percent rate of decline, Reuters reported.

The dismal forecasts come despite a historic $2.2 trillion fiscal package, replete with stimulus checks for families and relief for businesses.

Meanwhile, the Federal Reserve released industrial production and capacity utilization figures on April 15 (pdf), which show a month-over-month drop of over 5 percent.

“Total industrial production fell 5.4 percent in March, as the COVID-19 (coronavirus disease 2019) pandemic led many factories to suspend operations late in the month,” the Fed stated, referring to a month-over-month drop.

The data also shows that manufacturing output fell by 6.3 percent, with the motor vehicles and parts category posting the biggest fall of 27.2 percent.