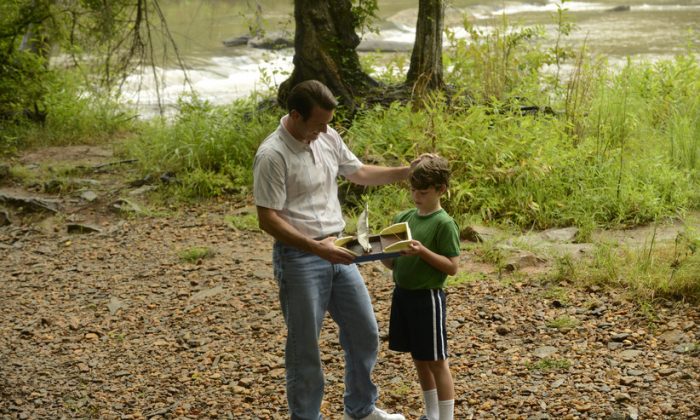 Resurrection Season 1 Spoilers: What Happens on Episode 3 of ABC Show?

Resurrection, one of the hot new shows, continues on Sunday night with episode 3, titled “Two Rivers.”

In the episode, the mystery is deepened after Jacob’s grave is exhumed. Henry is struggling to accept Jacob is really his son.

Bellamy and Maggie are searching for a connection between the deaths of Jacob and Caleb, and go digging at a local river–uncovering Caleb’s criminal past.

In photos from the episode Bellamy is trying to protect Maggie, holding a gun at three men in camoflauge who come upon them. No word yet on who they are.

Also, Bellamy and Caleb have a conversation shown in one of the promo trailers.

“I don’t know why you’re lying, or what you’re hiding from 13 years ago, but I’ll look under every stone until I find out,” Bellamy tells Caleb. “It’s not exactly something I’m eager to talk about,” Caleb says. “What’s that?” “Dying … there’s all this pain and then nothing, there’s a sense of peace.”

But Bellamy doesn’t buy it, trying to find out why Caleb told Jacob to lie. “I’m here to protect my family to protect the cost,” Caleb says. “There’s only one difference, we both know that it’s not goign to end well for that kid. “Mr. Richards, if you go near Jacob again, it won’t end well for you,” Bellamy says.

Meanwhile, Pastor Tom is involved a lot in this episode.

In the promo trailer, Jacob is making a dog for kids in the hospital. “I wanted to make a werewolf fighting a unicorn,” he said. Tom tells him to make one after he’s done the dog.

Tom, taken aside by Helen, tells her that Lucille doesn’t need help despite the mystery surrounding Jacob.

“I can honestly say that I don’t know what’s happening, but I’m willing to trust that God is going to show us the way,” he says.

“Are you sure that he’s the one who’s behind this?” counters Helen.