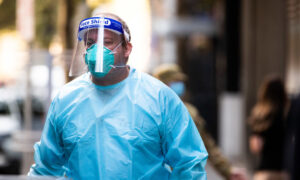 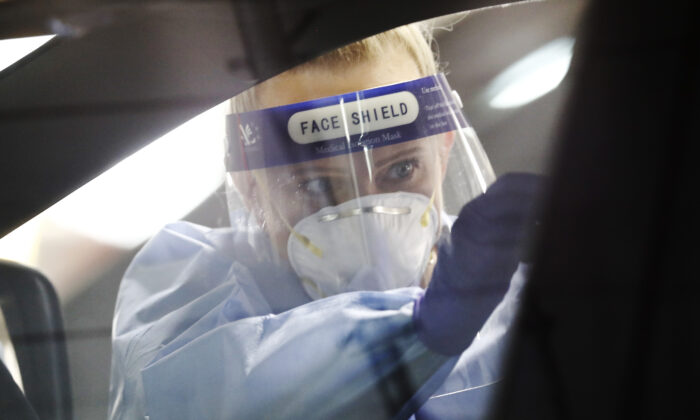 A medical practitioner performs a test on a member of the public on May 05, 2020 in Melbourne, Australia. (Photo by Darrian Traynor/Getty Images)
Australia

Masks must be worn indoors and restrictions are back after Victoria recorded another five cases of COVID-19 in Melbourne’s northern suburbs.

Masks will again become mandatory indoors for people aged 12 and over, though they can be taken off for eating, drinking and exercise.

Schools and workplaces will remain open, as will shops, cafes, restaurants and pubs, however existing density limits apply.

The new restrictions apply only to greater Melbourne, or people travelling into regional Victoria.

But visitor restrictions will also be introduced at hospitals and aged care facilities across the state.

The restrictions will be in place until at least June 4.

“This is about giving our contact tracers the time that they need to track this matter down and get on top of it,” Mr Merlino told reporters.

He said a public health advisory panel would weigh up whether further restrictions would be required for large events including football matches.

It comes after a man in his 60s became the fifth person in Melbourne’s northern suburbs to test positive to COVID-19 on Tuesday morning.

Merlino said the man had symptoms prior to the four cases identified on Monday, suggesting he could be the possible “source case” for the City of Whittlesea outbreak.

Genomic sequencing shows the outbreak is linked to the case of a Wollert man, who contracted the virus in South Australian quarantine earlier this month.

Wollert falls within the City of Whittlesea, and the man shopped at the same Woolworths in Epping North as one of the new cases, albeit on a different day.

But Victorian Chief Health Officer Brett Sutton said authorities were yet to establish a “definitive link” between the Wollert man and the five cases.

“There may still be another intermediary. We need to explore that, but we need to finish the very lengthy, very detailed interview with that case this morning,” he said.

Sutton confirmed the COVID-19 variant in the Whittlesea outbreak is B1617, which was first identified in India in October last year.

“We shouldn’t be complacent about this variant. It is at least as infectious as the so-called UK or Canterbury (variant),” Prof Sutton said.

A “tier one” exposure warning for Highpoint, the state’s third-largest shopping centre, has been reduced to five stores in the complex: Ishka, Kidstuff, Lush Cosmetics, Smiggle and Toyworld.

People who visited the stores within specific time periods on May 20 must get tested and isolate for 14 days.

The rest of the shopping centre has been downgraded to “tier two”.

Health Minister Martin Foley expects the list of exposure sites will grow in the coming days.

Meanwhile, the operating hours of some 26 testing sites will be expanded, including the Melbourne Showgrounds, which reached capacity after being open for five minutes this morning.

Authorities also urged “millions” of eligible Victorians to get vaccinated.

“The incentive to avoid restrictions is for our community to get vaccinated as quickly as possible,” Mr Merlino said.

He said he would be making an announcement about expanding the vaccine eligibility criteria in Victoria in the “coming days”.

Some 14,892 Victorians were tested for the virus in the 24 hours to midnight Tuesday, while 8269 received a vaccine dose.