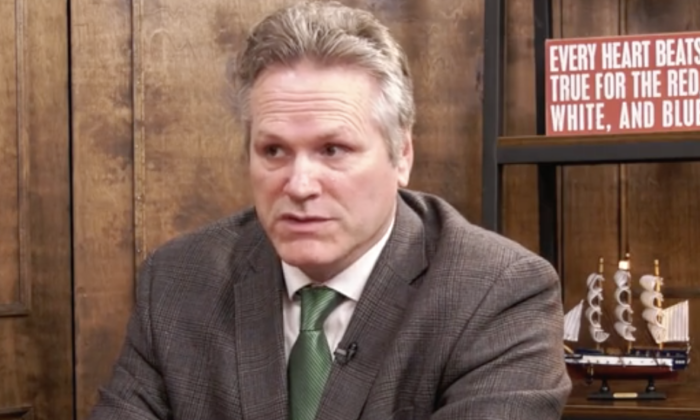 Alaska Gov. Mike Dunleavy in an interview with NTD in Washington, D.C., on Feb. 2, 2022.
National Security

“But really, when you get down to national security, nobody’s been able to tell me how relying on the Russians or the Saudis helped us with our national security. It makes no sense at all,” Dunleavy told Capitol Report’s Steve Lance during a recent interview after attending the White House governor’s meeting.

“We’re an energy giant here in America, here in Alaska. We should take advantage of that. We should make sure that we’re secure with our energy so we don’t have to rely on others. You see what’s happening now in Europe with this Ukraine–Russia issue, and there’s no reason to put America—it’s such a disadvantage, it makes no sense at all,” continued Dunleavy.

Dunleavy is referring to the fact that the European Union depends on Russia for around a third of its gas supplies, and with the current Russian threat to Ukraine, Europe faces losing that energy supply over the Ukraine conflict.

“We are concerned about the energy situation in Europe because it demonstrates the vulnerability of being too dependent on one supplier of natural gas and that’s the reason why NATO allies agree that we need to work and focus on diversification of supplies,” NATO Secretary-General Jens Stoltenberg said.

Dunleavy said relying on our adversaries for U.S. energy needs makes no sense from any perspective, but particularly because getting oil and gas from foreign countries contributes more to global greenhouse gases.

The Biden administration’s Bureau of Land Management (BLM) signaled on Jan. 10 that it plans to close millions of acres in the National Petroleum Reserve-Alaska (NPR-A) that has been available for responsible resource development.

“This request for additional stay and accompanying information makes clear the Federal government intends another unwarranted hit to Alaska and the nation,” Dunleavy wrote in a statement on Jan. 11, in response to BLM’s decision.

“This is another sign of the federal government turning its back on Alaska and hampering domestic energy production. The U.S. Department of Interior is putting the nation in a situation where we have to rely on foreign oil countries at a time for growing prices and concern for American consumers,” Dunleavy continued in the statement.

Dunleavy said BLM’s decision overlooked the needs and input of the native peoples living in that area. He criticized the Biden administration for not allowing his state’s resources from being fully developed to help his residents and the nation’s energy needs.

Besides having major oil and gas, Dunleavy told NTD, “We have the largest national forest in the country, we have one-seventh of the country’s timber, we have most of the rare earths and elements, most of our strategic metals—all of these resources can be brought to play, to bear, on helping the United States in its national security, also providing jobs, lowering the cost of energy.”