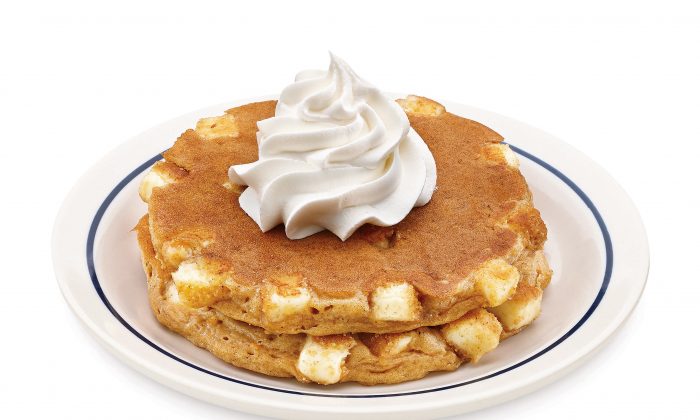 There’s a number of chain restaurants open on New Year’s Day. This undated product image provided by IHOP shows the restaurant chain's Pumpkin Cheesecake pancakes. IHOP is one of many businesses that roll out a number of limited-time flavors around the holidays. (AP Photo/IHOP)
Life & Tradition

A number of chain restaurants like Denny’s, Applebee’s, IHOP, and others are open on Christmas Day.

Denny’s, IHOP, Burger King, and McDonald’s are all open until late night. Check local listings for hours or call.

Here’s a few others that are open; hours vary:

Jack in the Box

LAFAYETTE, Ind. (AP) — Passengers aboard a northern Indiana city bus received surprise Christmas gifts when three men got on and passed outs notes asking for a favor with $100 bills inside.

CityBus driver Mike Pattengale said he stuck the note in his pocket when it was handed to him.

“But I thought it might be something good when I heard everybody talking and carrying on,” he told the Journal & Courier (http://on.jconline.com/13FdFCx ).

Pattengale said he didn’t know any of the 12 passengers, but said each was smiling when they stepped off the bus. He said two women who appeared to be in their 20s squealed.

“They had babies with them and you could see they were tickled to have it,” he said.

The men approached his bus in downtown Lafayette about 6:45 p.m. Tuesday. Pattengale unfolded the paper when got to Tippecanoe Mall and discovered the $100 bill.

The note the money was wrapped in began: “I need a favor from you!” It urged recipients to buy something they normally couldn’t afford. The note said if the recipient isn’t in need, to please give it to someone who is. It also asks recipients to promise themselves to help someone they don’t know, in a big way or small, nextChristmas.

Finally, it asks the recipients to forget the person who gave them the note, which was signed “Samaritan.”

Pattengale said he will share some of the money with his daughter and two grandchildren, who “could use a little help.”

He said the men didn’t ask for much in return.

“I know I’m going to try to follow through on a daily basis and do something nice for somebody whether they’re close to us or not,” he said.