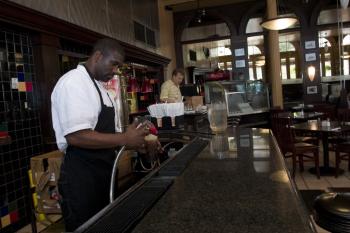 In the online survey representing 802 restaurants, 72 percent of respondents said the HST on restaurant meals has had a negative impact on business. (The Epoch Times)
Canada

Restaurants Hungry, Movies Booming With HST’s Arrival in BC

Joan Delaney
Senior Editor, Canadian Edition
Joan Delaney is Senior Editor of the Canadian edition of The Epoch Times based in Toronto. She has been with The Epoch Times in various roles since 2004.
View profile
Follow
biggersmaller
Print
The Harmonized Sales Tax is earning accolades from British Columbia’s film and TV industry, but it’s forcing restaurants—the fourth-largest private sector in the province—to go on a diet as register totals get slimmer.

Movie and TV productions are now saving the 7 percent PST they once paid for rentals and other items, making the province a more competitive destination. That will mean more projects and jobs says Peter Leitch, president of North Shore Studios and Mammoth Studios and chair of the Motion Picture Production Industry Association of British Columbia.

“Studios, producers, equipment rental shops, set-builders, and caterers will all see costs go down with harmonization, making them more competitive and helping to grow their businesses and jobs,” Leitch says.

Production companies were unable to recover PST on goods and services previously because they were not viewed as manufacturers, but the HST is recoverable, translating into an overall 7 percent production savings.

According to the Smart Tax Alliance, the HST savings is attracting multi-million-dollar movie and TV productions to B.C. and is expected to create over 100,000 new jobs in the industry, leading to over $10 billion in investment by 2020.

The alliance, which has teamed up with filmmakers, is a newly formed coalition of 30 B.C. business and industry groups organized to support the new tax, which took effect July 1.

“The PST was a barrier to the kind of investments that create employment and drive the economy. Harmonization takes down that barrier.”

Conversely however, the Canadian Restaurant and Foodservices Association (CRFA) says a new province-wide survey they conducted shows that “the B.C. restaurant industry’s worst fears about the HST have been realized.”

In the online survey representing 802 restaurants, 72 percent of respondents said the HST on restaurant meals has had a negative impact on business. On average, respondents reported a 10 percent decline in sales compared to the same period last year.

“There’s no question the HST is hurting B.C. restaurants of all types, from fine dining to take-out,” says CRFA president and CEO Garth Whyte.

The survey also found that 53 percent of respondents said their customers are spending less, 56 percent have fewer customers, 47 percent have been forced to cut back on staff/staff hours to adjust to the HST, and 26 percent have had to offer more deals and promotions to offset the HST fallout.

Just 3 percent report the HST is having a positive impact on their business.

Since the 12 percent tax was first announced more than a year ago, the CRFA has warned that it would result in significantly lower sales for the restaurant industry, B.C.’s fourth-largest private-sector employer.

The tax, a combination of the 7 percent PST and the 5 percent GST, is charged on restaurant meals while most of the food sold in grocery stores is tax-free. Restaurant meals were previously exempt from the PST.

Despite receiving more than 200,000 signed petitions from restaurant industry owners, staff, and customers opposing the tax on restaurant meals, the B.C. government has not addressed their concerns, according to the CRFA.

“The HST has dramatically tipped the playing field against restaurant operators,” says von Schellwitz. “It’s time for government to step up and take action to help our members deal with a very tough transition to this new tax.”

Former B.C. premier and anti-HST crusader Bill Vander Zalm has launched a constitutional challenge of the controversial tax on the grounds that the provincial government violated core constitutional rights by enacting it without legislative authority.

In turn, several business groups, including the Mining Association of British Columbia and the B.C. Chamber of Commerce, have filed for a judicial review of the decision to approve an anti-HST petition led by Vander Zalm, and its draft bill.

Signed by more than 700,000 British Columbians opposed to the tax, the petition includes a draft bylaw to have it repealed.