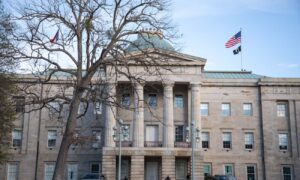 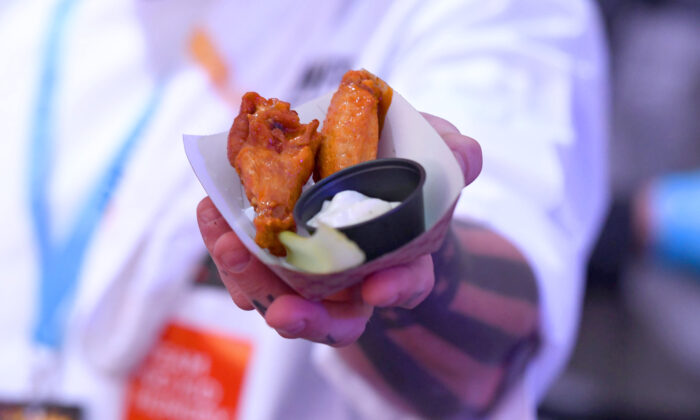 Chicken wings are on display at a food festival at Pier 97 in New York City, N.Y., on Oct. 10, 2019. (Noam Galai/Getty Images for NYCWFF)
Economies

A restaurant owner from Buffalo, New York, told Fox Business on Monday that chicken wings are getting more expensive because farms are struggling to deal with a national labor shortage.

Greg Duell, the co-owner of Duff’s Famous Wings, told Fox Business that wing prices from his supplier were up 99 percent and that they couldn’t keep up with his customers’ demand for chicken.

“The chicken wing farms in America, they’re having trouble retaining and recruiting employees,” Duell told Fox Business. “When that happens, they can’t process the birds fast enough, they have to feed them more, the feed costs have gone up, the birds are getting bigger and they can’t process and get them out,” he said.

Dan Ponton, president and chief executive of Roosters, an Ohio chicken restaurant, told the Dayton Daily News that the prices of wings are the highest they have ever been in the 33 years he’s been in the industry.

“A couple of years ago, in an earlier shortage, prices for chicken wings rose to $2.25 a pound—and that ‘was just unheard of in the industry,’” the CEO told Dayton Daily News. Today, prices have reached $2.75 a pound, according to Dayton Daily News.

Some restaurants, struggling to staff themselves as pandemic restrictions begin to lift, have offered incentives for employment in an effort to combat the labor shortage. Reported benefits have included free iPhones and monetary bonuses.

The Federal Reserve said the labor shortage could last months, according to Business Insider. Bank of America also predicts the job market will recover by early 2022.

Duell called the recent expansion of unemployment benefits a problem and said it was “definitely” causing the labor shortage in his industry, according to Fox Business.

“Unfortunately, I couldn’t possibly keep up with an additional $300 on top of an unemployment benefit,” he told Fox Business. “The menu prices would be skyrocketing more than they already are.”