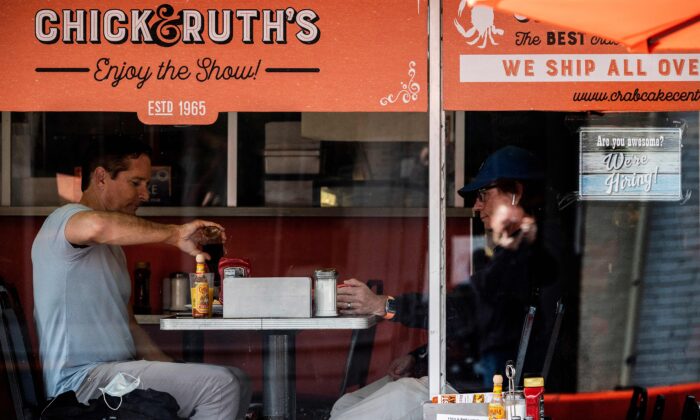 People eat breakfast at a restaurant that's advertising that they're hiring in Annapolis, Md., on May 12, 2021. (Jim Watson/AFP via Getty Images)
Economy

The U.S. restaurant industry has been steadily recovering from the COVID-19 pandemic since February, although recent employment data show that restaurant owners face challenges ahead.

Restaurants and bars lost 42,000 workers in August following several months of strong jobs growth, the latest sign that the industry is wrestling with the Delta variant of the CCP (Chinese Communist Party) virus and a persistent shortage of labor.

Michael Haskett, owner of M.B. Haskett Delicatessen in Sioux Falls, South Dakota, said he feels lucky because his business had a pretty good summer thanks to the patio that allows outdoor seating at his establishment.

But with growing concerns over the Delta variant, he believes the next few months are going to be “pretty tough,” especially in his state, where it gets extremely cold.

Haskett’s business hasn’t fully recovered from the initial shock of the pandemic. The restaurant is only open half of the hours that it was open before the virus struck, and the severe labor shortage is the restaurant’s largest bottleneck.

“The sign ‘now hiring’ has been on the window for a year and a half. People just don’t apply. I don’t know, it’s tough to find workers,” Haskett told The Epoch Times.

He hopes to expand his restaurant’s service and start serving dinners again, but hiring two additional cooks has been extremely challenging throughout the summer. He also needs to hire more servers and dishwashers.

“I’m cooking,” he said. “I’m not just sitting down in the office. I’m on the line, washing dishes, taking garbage out.”

As with many small-business owners, Haskett raised salaries to attract more people. His cooks now earn 20 percent more on average compared to salary levels before the pandemic, he said. But offering higher wages hasn’t really solved the staff shortage problem that he and many other restaurant owners are facing in the city.

The Delta variant threatens to push more small businesses into permanent closure, according to the group.

“Businesses are at the end of their rope. The virus is surging, summer weather is ending, and months of debt are piling up,” Erika Polmar, executive director of the IRC, said in a statement.

Those restaurants need urgent government support to tackle financial challenges and pay competitive salaries to maintain their employees, she said.

The IRC is calling on Congress and the Biden administration to replenish the Restaurant Revitalization Fund as the program’s funding fell far short of demand, critics say.

There are dining restrictions in nearly a third of the states in the country. Restaurant reservations have also plummeted recently, with states such as New York, Pennsylvania, and Maryland seeing a near 50 percent drop in bookings compared to 2019 levels, according to the IRC.

And a recent survey by the National Restaurant Association shows that 60 percent of adults have changed their dining habits due to the Delta variant.

The Labor Department’s closely watched jobs report on Sept. 3 shows that U.S. employers added only 235,000 jobs in August. The report shocked analysts, as it was far below the consensus forecast of 733,000.

Restaurants and bars, which had been one of the job creation engines over the past several months, were a major disappointment in August. The sector saw its first downturn in eight months.

Employment in retail, another hard-hit sector, also declined by 29,000 in August, with the majority of losses coming from food and beverage stores.

U.S. job openings reached an all-time high of 10.1 million in June, according to the Bureau of Labor Statistics, with the hospitality industry, which consists of restaurants and bars, accounting for 14 percent of the available jobs.

Fouad Alsharif, owner of a deli and the Italian restaurant Biricchino in New York City, is looking to expand his business. And September is one of the busiest months of the year for his restaurant.

“Everybody’s back from vacation. We are looking to double or triple our business,” Alsharif told NTD Business.

But he needs to hire more people.

Many small business owners have been complaining about the unemployment benefits offered by the federal government. The supplemental benefit, introduced during the pandemic, is seen as one of the factors that have contributed to the severe U.S. labor shortage.

The enhanced $300 unemployment benefit expired on Sept. 6. According to Goldman Sachs economists, termination of the federal benefit could help hiring numbers in the coming months. The economists predicted in June that ending the benefit could boost job growth by more than 400,000 nationwide in September alone.

However, it’s still unclear whether restaurants will benefit from that growth.

“This is the period of the great reevaluation,” said Sara Gordon, vice president at The Adecco Group, the world’s second-largest human resources provider.

The Delta variant poses risks, especially for restaurant workers, Gordon noted, and people who previously worked in restaurants and bars are learning additional skills to expand their career options.

“They’re, quite frankly, being a little bit picky because there is so much opportunity out there,” she said.