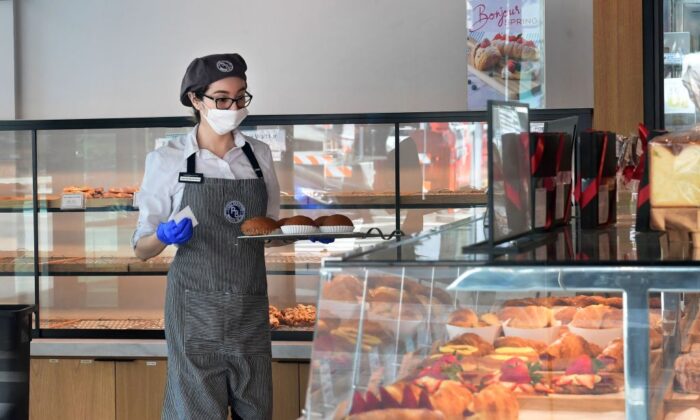 An employee at a cafe and bakery wears a facemask in Los Angeles, Calif., on March 17, 2020. (Frederic J. Brown/AFP via Getty Images)
Business

A national restaurant association representing about half a million eateries estimates the hit from COVID-19 to American foodservice sales will be $225 billion, while the full economic impact could be $675 billion.

The National Restaurant Association wrote to President Trump and congressional leaders on March 18, projecting that in the next three months, the outbreak-related economic fallout could lead to the loss of between five and seven million jobs.

The association said that because every dollar spent in a restaurant generates $2 down the road in the broader economy, the full economic impact of the outbreak will be $675 billion.

According to a Johns Hopkins tally, the United States has over 7,700 confirmed cases of the disease and 118 deaths attributed to the CCP (Chinese Communist Party) virus, commonly known as the novel coronavirus.

So far, at least 28 states have closed dine-in options for restaurants, and more are likely.

“We are revising our business model to provide meals in different ways (takeout, delivery, safety-enhanced dine-in), but we are facing economic headwinds that will lead many restaurants to shut down operations, lay off workers, and end our service in our communities,” Sean Kennedy, executive vice president of public affairs, wrote in the letter.

The association called for the administration to adopt measures to help them fight the crisis, including tax relief and more direct forms of financial assistance.

The overall value of the requested package is $455 billion, with $145 billion in direct relief.

The association said the disruption-related loss in sales amounts to around 25 percent of the previously estimated $899 billion the industry expected to make in 2020.

President Donald Trump has been meeting and taking calls from industry executives to assess the extent of both the expected and realized economic damage from the pandemic.

On March 17, Trump spoke with executives from the tourism industry, which includes restaurants.

In the meeting, U.S. Travel Association CEO Roger Dow said the travel slowdown could wipe out hundreds of billions in total travel spending and lead to millions of job losses.

“We know your industries are among the hardest hit,” Trump told the executives. “We are going to come out stronger than ever before.”

“We literally had the strongest economy on earth,” Trump said, noting over 124 countries have been affected. “Unbelievable.”

In a massive federal effort Tuesday, Trump asked Congress to speed emergency checks to Americans, enlisted the military for MASH-like hospitals, and implored ordinary people—particularly socially active millennials—to do their part by staying home to stop the spread of the virus.

His proposed economic package alone could approach $1 trillion, a rescue initiative not seen since the Great Recession.

“I personally lived through many crises, starting with the S&L, the 9/11 crisis, the Great Recession. I’ve been doing this for 35 years,” Hilton CEO Chris Nassetta told Trump at the White House meeting, adding that tourism in America “has been impacted in a devastating way.”

Most analysts now expect the U.S. economy to contract sharply in the rest of March and throughout the second quarter due to the worsening pandemic.

Beth Ann Bovino, the chief U.S. economist at Standard & Poor’s Ratings Services, wrote in a report that, “While the economic data for March has not been released, social distancing is likely to lead to a steep drop in consumer spending, which will have knockdown effects on business investment.”

The outlook is also dimmed by plummeting oil prices hurting energy infrastructure investment, as well as the impact of travel bans, she added.

“As a result, S&P Global Economics believes that the U.S. is entering recession—if not already in one.”

It expects the slump will be followed by a slow U-shaped recovery in the second half of the year, with 3 percent and 5 percent year-over-year growth in the third and fourth quarters.