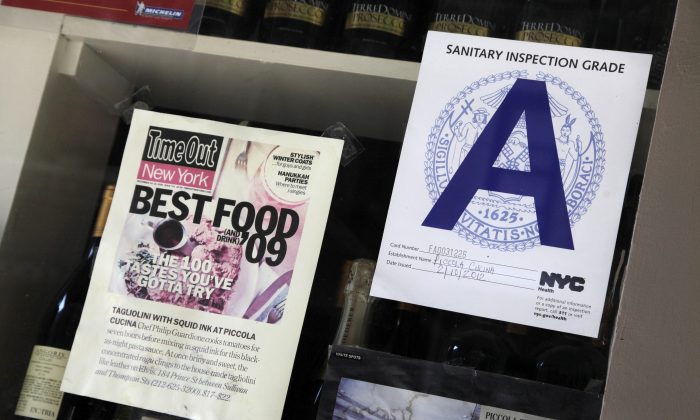 The letter "A" is shown as the Sanitary Inspection Grade for a restaurant in the SoHo neighborhood of New York, May 28, 2012. (Mark Lennihan/AP Photo)
New York

NEW YORK—Five bills, which would reform the Health Department’s fine schedule and inspection of restaurants were approved by the City Council’s Committee on Health on Oct. 7. The legislation is supported by City Council Speaker Christine Quinn and a vote by the full council is expected shortly.

Mayor Michael Bloomberg has expressed his disdain for the bills, which would revise the restaurant grading system, which was first implemented in July 2010. He accused the legislation’s backers of pandering to their campaign donors. The legislation will lower fines restaurants face for health code violations.

“There have to be penalties, not to raise money, the penalties are to get you to follow the law,” said Bloomberg speaking on the topic on Aug. 19.

Each year the Department of Health fines the city’s 24,000 restaurant owners around $40 million for health code violations. Last year, the department collected $52 million in revenue from fines.

Many restaurant owners in lower-income communities have found the fines, which can amount to thousands of dollars, have hurt their profit margins.

Committee on Health Chair Maria del Carmen Arroyo said the bills would reduce fines for restaurant owners by about $10 million per year.

One of the bills sponsored by Arroyo would set up a food service establishment inspection ombudsman office within the Department of Health and Mental Hygiene. Restaurant owners could take complaints to the ombudsman’s office, and in some cases have violations withdrawn.

City Council sponsors of the legislation want the Health Department to work more closely with restaurant owners to help them know the code and meet it.

Sarah Matheson contributed to this report.