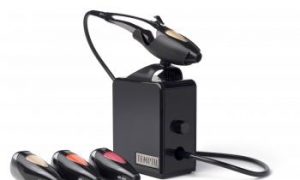 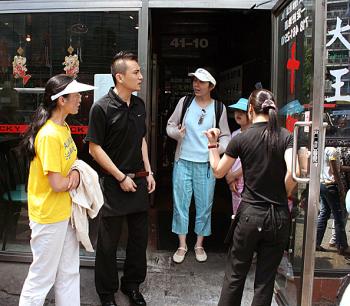 DISCRIMINATION: Ms. Huang Wei, her daughter, and Ms. Sun Zhenyu are forced to leave the Lucky Joy Restaurant, in this file photo from June 1, 2008. (Evan Mantyk/The Epoch Times)
US

NEW YORK—Two women and a young girl who practice Falun Gong were each awarded $7000 in damages after they were denied service and kicked out of a Queens restaurant for their beliefs last year.

The New York State Division on Human Rights handed down its ruling on Oct. 2, ordering the Lucky Joy restaurant in Flushing to pay damages and prominently affix an anti-discrimination poster provided by the human rights body.

The poster starts with the words “DISCRIMINATION REALLY HURTS,” in red. In addition, the restaurant is required to establish anti-discrimination training and procedures.

On June 1, 2008, Sun Zhenyu, Huang Wei, and Huang’s daughter, Feng Xinye, had gone to the restaurant for a bite to eat after attending a Falun Gong rally near the library in Flushing.

Sun was wearing a yellow t-shirt saying “Falun Dafa is Good” and “Truthfulness Compassion Tolerance,” the core tenets of the spiritual discipline, in Chinese and English.

Employees soon made it clear that the three women weren’t welcome. “We don’t sell to Falun Gong,” the man taking orders said, according to Sun and documents of the judgement.

When pressed for an explanation, he said simply, “We’re just not going to sell,” in Chinese, before holding his arms wide and shooing the three out the door, shouting, “Get out of here!” pointing at the exit.

Huang Wei’s daughter, Xinye, who was nine at the time, was confused and scared at their treatment, and began to cry.

Sun, 48, who came to the U.S. in 1992 and works as a biologist, said she found the situation “very unpleasant” and “humiliating.”

“I’d never experienced this kind of thing before,” she said in an interview. “I never thought this kind of thing could happen, being in America so many years. Any religion, any belief, shouldn’t be discriminated against here in the U.S.”

The New York Human Rights Law makes it illegal to discriminate based on a person’s beliefs.

“Credible and unrebutted proof” showed that the Lucky Joy restaurant denied service to the three women “solely on account of their evident Falun Gong creed,” the documents say. “Therefore, respondent has violated the Human Rights Law.”

When contacted by The Epoch Times for this story, the person answering the phone at Lucky Joy restaurant said the manager wasn’t there, and that they had no remarks about the case, before hanging up.

For Sun, the issue highlights the reach of the Chinese Communist Party’s (CCP) anti-Falun Gong propaganda. Propaganda was a mainstay of the campaign to persecute Falun Gong in mainland China, beginning in July 1999 after the practice’s popularity began to exceed that of the CCP, which still maintains a tight grip over any independent groups in the country.

At that time, China’s state-run media began printing hundreds of articles each month vilifying Falun Gong, and exposés full of fabricated information about the practice were regularly aired on primetime television.

Some of the same material is occasionally broadcast on stations like SinoVision, a New York-based Chinese Mandarin television network, who, like many overseas Chinese media, often uses free content from the CCP’s main mouthpieces like China Central Television (CCTV).

CCTV answers directly to the Central Propaganda Department of the CCP, and spearheaded the television campaign to vilify Falun Gong in China.

Around the time of the discrimination incident SinoVision was also airing reports, identical in message to that of CCTV reports from the same time period, claiming that Falun Gong practitioners failed to support victims of the Sichuan earthquake in China.

“They’re poisoned by the CCP’s propaganda,” Sun said, referring to the owners and employees of Lucky Joy. “It’s all the lies and rumours the Communist Party has been spreading over the years, saying good people are bad people, attacking Falun Gong.”

Despite the favorable decision and compensation, for Sun it is cold comfort. She says she wouldn’t go back to the restaurant. “It was a terrible, very unpleasant experience, and it will stay with me. I’m pretty brave, but I couldn’t go back there.”