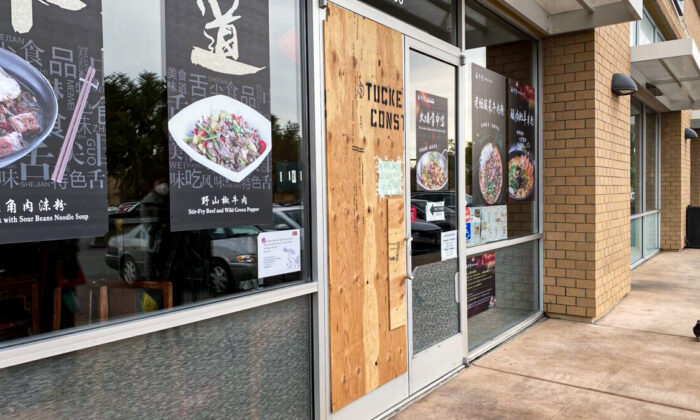 Restaurant Chain Broken Into 5 Times in 2021, Police Give Safety Tips

SAN JOSE, Calif.—The left door of a restaurant is boarded up, contrasting the still-intact glass door beside it. A light green paper taped on the plywood reads: “We were burgled last [night]. No cash here! 11/24”

Local Bay Area restaurant chain Noodle Talk has had its three stores broken into five times this year. Two locations suffered one break-in each, while the restaurant in San Jose was broken into three times. The last break-in was as recent as Thanksgiving.

Lina, the manager of Noodle Talk in San Jose, told NTD television that after each break-in they must close their business and wait for repairs.

The repeated damage has the staff on edge. “The looting happened again and again, so our workers [are] really worried about their safety and their workplace,” Lina said.

Crime has not only affected their windows and employees, Lina said, “… our customers [are] considering their safety eating at our restaurant, so our business rapidly dropped.”

Burglars strike around 3 a.m. to 4 a.m., and Lina said it costs about $250 each time to replace the shattered glass. The burglars do not take much because the restaurant does not keep a lot of cash on hand.

“The first time, they got like 20 bucks. Second time, they only got a couple coins. And then the last time, they really got 40 bucks,” Lina said.

The restaurant is thinking about reducing hours, but that would mean less business. They have been working with the police to pursue the case and hope to see results.

The restaurant is one of many businesses that were broken into in 2021. Another business owner fears her bubble tea shop will be the next target.

“I’m really worried the next store will be me,” said Alice Jin, owner of Calibear Cyber Cafe in Sunnyvale. “We want to ask the government to protect us. We want the police officers to protect us.”

Jin is friends with the owner of Noodle Talk. She said glass door repair companies are backlogged with requests due to smash and grabs.

They blame the break-ins on Proposition 47, which reduced some felony charges to misdemeanors.

“Prop 47, under $950, you don’t have to go to jail … They just need a [hammer] and they’re in and stealing your money. And you cannot punish them. If you do something to them, you [will] probably go to jail. So I can’t [believe] the law is for the normal people, not for the criminal people,” Jin said.

A Crime Prevention Forum to support local business owners was held at Noodle Talk on Dec. 20. The forum was attended by law enforcement agencies, business owners, and community members. The police said they can’t make laws, only enforce them. But they do encourage people to report a crime, even if the amount stolen does not exceed $950.

“Burglaries in San Jose are still a priority. So when somebody calls in and someone is breaking into their house or into their business, it is a huge priority for the police officers. There isn’t one police officer that doesn’t start going that direction if they’re available,” said Todd Trayer, a captain with the San Jose Police Department.

They have advice for businesses to stay safe from burglars.

“They like easy targets,” said Ken Binder, undersheriff at Santa Clara County. Binder recommends increased security measures such as deadbolts and surveillance cameras. “The hope is that criminals will go to another business. They like the path of least resistance.”

More police have been stationed in the area since the break-ins. They encourage businesses to report any criminal activity.