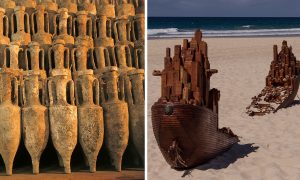 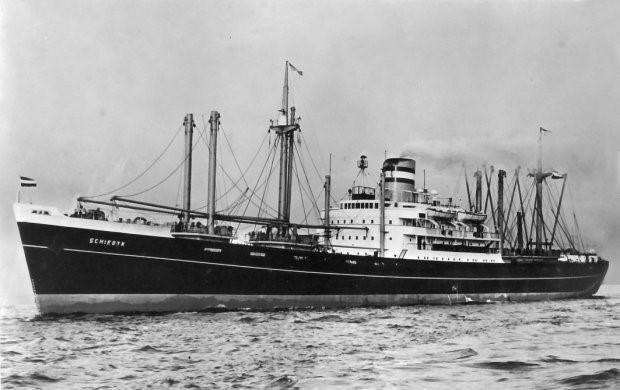 The MV Schiedyk is shown in this handout image. A cargo ship that sank off the west coast of Vancouver Island more than 50 years ago is now polluting the waters of a popular marine park. (The Canadian Press/HO-Bligh Island Shipwreck Response)
Canada

BLIGH ISLAND—The Canadian Coast Guard says fuel leaking from a historic shipwreck in a popular marine park on the west coast of Vancouver Island has been confirmed on shore and oiled at least two animals.

Kiri Westnedge, information officer for the Bligh Island shipwreck, says in a statement that the amount of oil product on the water is between 30 and 50 litres at any given time.

“Right now our highest priority is to assess and identify the best course of action to remediate the threat and protect the ecological, socio-economic and cultural areas at risk,” Westnedge says, adding cleanup costs remain unknown.

The MV Schiedyk left Gold River, B.C., with a load of wood pulp and barley on its way to Oregon on Jan. 3, 1968, and hours later hit a ledge off Bligh Island in Nootka Sound.

The ship went down within the boundaries of Bligh Island Marine Provincial Park, which was created almost three decades after the sinking.

The coast guard has said a fuel-like sheen was spotted in September but its source was only discovered after an investigation. An incident command centre was established Dec. 3.

Footage collected using a remote underwater vehicle shows the upwell of oil is coming from several locations on the vessel, which sustained significant damage.

Fuel samples have been sent to a lab for identification, but historical documents say the vessel carried both bunker and diesel fuel, the statement says.

One sea otter and a blue heron have become oiled. Crews are attempting to capture the otter so it can be taken to the Vancouver Aquarium Marine Mammal Rehabilitation Centre.

“A second, deceased sea otter has also been found in the area and a necropsy is being performed to determine if the cause of death was related to oil exposure,” Westnedge says.

A team of wildlife and marine mammal experts are working to keep animals away from the site and to capture and rehabilitate any that are affected.

The fuel reached the shoreline before crews arrived, the statement says.

Westnedge says almost 5,000 metres of boom has been set out to protect sensitive areas and crews will continue responding to the leak over the holiday season.

No oil product has been observed near fish farms in the area and ocean currents are pushing the product in the opposite direction. Additional curtain booms can be deployed if that changes, Westnedge says.

There are 40 personnel responding in the field and 43 managing the virtual incident command post. Six marine pollution vessels are on−site and two more are expected in the coming days, the statement says.