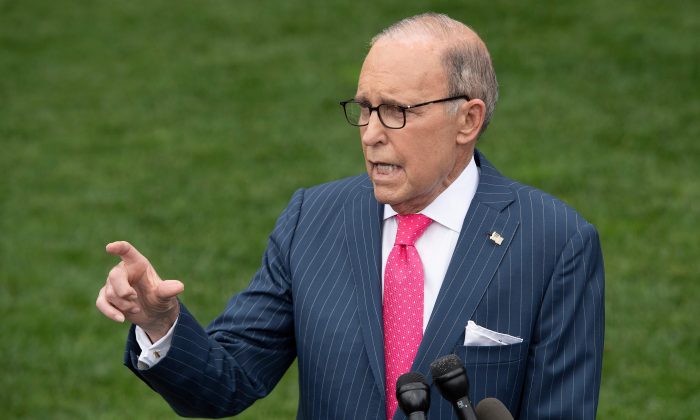 During an interview with CNBC’s Capital Exchange program on July 9, Kudlow said that while he preferred to take an optimistic view of the future, and believed a deal was possible, the remaining issues yet to be resolved presented a “tough” situation for both sides.

Kudlow used a football analogy featuring his favorite team to describe how a deal between the two sides could fail to materialize.

“It’s like being on the 7-yard line at a football game, and as a long-suffering New York Giants fan, they could be on the seven and they never get the ball into the end zone,” he said.

“When you get down to the last 10 percent, 7-yard line, it’s tough,” Kudlow added, referring to the trade negotiations.

Despite these difficulties, President Donald Trump told his advisors during a meeting on July 8 that he wanted a deal, and believed that Chinese leader Xi Jinping likewise wanted one, Kudlow said.

U.S. and China trade officials held a phone discussion on July 9, marking a new round of talks after Trump and Xi agreed to restart trade negotiations during the sidelines of the G-20 Summit in Japan last month.

“Both sides will continue these talks as appropriate,” a U.S. official told Reuters in an email, declining to provide details on what was discussed during the call between U.S. Trade Representative Robert Lighthizer, Treasury Secretary Steven Mnuchin, and Chinese Vice Premier Liu He and Commerce Minister Zhong Shan.

Prior to the Trump-Xi meeting, trade talks had stalled between the two countries for six weeks, after Beijing reneged on commitments negotiated over months of talks, according to U.S. officials.

Kudlow said it was a big deal that the two leaders agreed to resume talks.

However, unlike the United States-Mexico-Canada Agreement (USMCA), which the Trump administration hopes to promptly push through Congress, a trade deal with China would take longer to negotiate, Kudlow said.

“There is no time limit on China. There is no speed. We want a good deal,” he said.

Reiterating previous statements from U.S. officials, Kudlow said trade talks broke down in May because “there was a lot of rollback of what we thought were commitments from the China team.”

“We thought we had commitments, and those commitments were removed,” he said.

The Trump administration had been pressing for the Chinese regime to reform laws in a range of areas to address core U.S. concerns about Beijing’s unfair trade practices. These include theft of U.S. intellectual property, forced transfer of U.S. technology as a condition for entering the Chinese market, subsidies from domestic industries, and currency manipulation. Enforcement of such reforms is also a sticking point for the United States.

“Our team, time and again, has asked for a change in Chinese laws, and resistance mounted on that point from the other side,” Kudlow said. “They seem to believe that the State Council or the Politburo can promulgate regulations and that would be sufficient, and we don’t agree.”

Kudlow said statements from “various power centers” in China have indicated that the regime wanted “fair and equitable agreement.” However, given that Beijing has persistently engaged in unfair and “frequently WTO illegal” trading practices over the past two decades, any final deal is not going to be balanced, he said.

“They are not reciprocal, they are not open, and they do not conform with the norms of world trading,” he said. “We want that changed, as part of an agreement.”

Kudlow and Commerce Secretary Wilbur Ross clarified statements made by Trump in Japan regarding the easing of restrictions on Chinese telecom giant Huawei, which had been placed on an Entity List in May due to national security concerns. The move effectively banned the company from doing business with U.S. suppliers.

Speaking at annual department conference in Washington on July 9, Ross affirmed that the Huawei would remain on the Entity List, meaning that licenses would likely be denied—but he also offered an opening for some to be approved.

“To implement the president’s G-20 summit directive two weeks ago, Commerce will issue licenses where there is no threat to U.S. national security,” Ross said.

This means, for example, that U.S. chip companies would be permitted to sell certain products to Huawei that are readily available from other suppliers, such as those from South Korea, Taiwan, and Vietnam, Kudlow said.

But U.S. firms will not be able to sell any equipment to the Chinese telecoms equipment maker that would help it develop its 5G capabilities, he said.