WASHINGTON—A resolution aimed at preventing organ transplant operations from becoming “a profitable tool in a cold genocide” was presented at an annual meeting of the American Medical Association in Washington on Nov. 11.

Supporters hope that the medical community can follow the example of the U.S. Congress, which has passed a resolution calling for a stop to forced organ harvesting from prisoners of conscience.

The resolution was submitted to the AMA by the Medical Society of the District of Columbia. It calls for the following:

Presenting the resolution to a reference committee, Joseph Gutierrez, chair of the Medical Society of the District of Columbia’s delegation to the American Medical Association, said, “We are very concerned with the increasing reports, out of China being particular, regarding forced organ harvesting for transplantation.”

According to the investigative report “Bloody Harvest/The Slaughter-An Update,” released by investigators David Kilgour, David Matas, and Ethan Gutmann in 2016, the organ transplant industry in China performs 60,000 to 100,000 organ transplants per year, and the Chinese Communist Party engages “in the mass killings of innocents, primarily practitioners of the spiritually-based set of exercises, Falun Gong, but also Uyghurs, Tibetans, and select House Christians, in order to obtain organs for transplants.”

Gutierrez said a big problem is that the American public and medical community still don’t have a broad knowledge of the seriousness of the forced organ harvesting issue, and media coverage is lacking.

Raymond Scalettar, a clinical professor at George Washington University Medical Center and former chair of the American Medical Association Board of Trustees, said in support of the resolution: “This is a very important resolution on what is being called ‘cold genocide.’ The AMA has a significant representation at the World Medical Association. Hopefully, they can go forward and explore what else they can do in order to end this cold genocide.”

Referring to the resolution as “seriously important,” Scalettar said: “We want these transplant ethics to be unanimous throughout all countries, not just the United States. And we think the Chinese government also needs to comply.”

Dr. Torsten Trey, executive director of the nonprofit Doctors Against Forced Organ Harvesting (DAFOH), said to the committee, “The world saw medical abuse during the Holocaust, but it has never seen a genocide in which organs were systematically harvested and used for a profitable transplant business.

“Resolution 210 provides an opportunity to establish global leadership in ethics. The U.S. Congress passed House Resolution 343 calling for an end to forced organ harvesting in China, and the medical profession should do no less to stop this transplant abuse.”

Dr. Weldon Gilcrease, deputy director of DAFOH, said it was very important to start the conversation, to have people be aware of the atrocities that are occurring in China.

Gilcrease said that because of a lack of information, the American public and medical community are at risk of becoming part of the problem. “We have real concern for complicity in two settings. We have complicity in our patients going to China to get an unethically sourced organ, as well as our training of Chinese that they return to China and are involved in forced organ harvesting.” 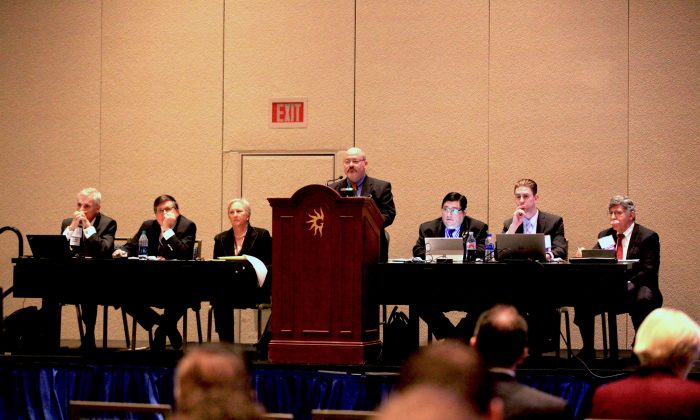