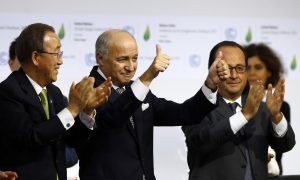 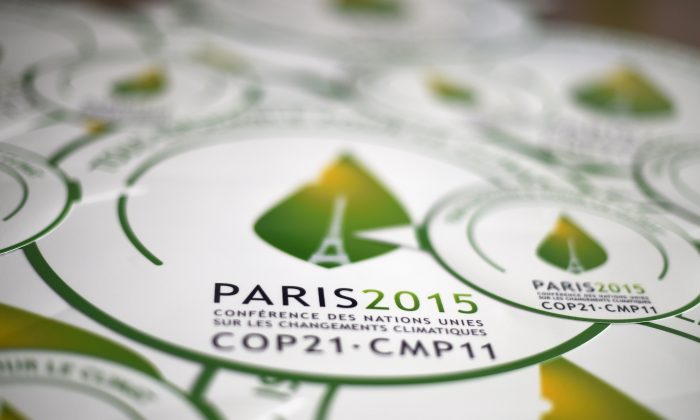 Stickers of the COP21, the Climate Change Conference 2015 in Paris. (Dominique Faget/AFP/Getty Images)
US News

The Republican Congressman said the agreement, which was not approved by Congress, puts the United States at a “competitive disadvantage” due to a loss of American jobs and increased energy costs for taxpayers. Arrington is recommending that the United States exits the agreement before the official end date of Nov. 4, 2020.

Arrington said, “At a time when American innovation is leading the way in environmental stewardship, the Paris Agreement is political window dressing, at best. This feel-good measure would have no meaningful impact on international air quality but, instead, would levy a huge tax on middle and working-class families costing Americans $250 billion dollars and 2.7 million jobs.”

“As a result, Americans would be forced to pay higher prices at the pump and for their homes; all the while, giving a pass to the world’s biggest polluters. Today, I am introducing legislation that will ensure Americans will no longer be bound by this feckless, inequitable, and economically crippling agreement.”

Myron Ebell, Director of Global Warming and International Environmental Policy at the Competitive Enterprise Institute, spoke to The Epoch Times about the climate change narrative and how it is driven by a political agenda.

“We have international treaties starting with the U.N. Framework Convention on Climate Change in 1992, signed at the Rio Earth Summit, the Kyoto Protocol in 97. There were various attempts in the early to mid-2000s to do something, and then finally in 2015, the Paris climate treaty, which is protocol to the underlying framework convention.”

According to Ebell, those who signed onto the Agreement said they would use energies that reduce carbon emissions by using wind and solar power instead of coal, oil, and natural gas.

“If global warming really is a crisis, this can’t possibly be the way to solve it, because windmills and solar panels are very limited technologies. They can provide only a very small part of the energy the world needs,” said Ebell.

“But the people who are behind this push and who promote windmills and solar panels as the solution, well, what’s in it? Well, there’s a huge redistribution of wealth to the people who provide wind and solar power. Nobody would adopt these technologies without massive government subsidies and government mandates.”

Ebell points to the fact that here in the United States, the government gives tax subsidies to anybody who builds wind or solar farms, “most of the states have mandates for turning part of the electric grid over to wind and solar power.”

“So a lot of this, of what’s been done so far, I would just call it a racket. It has nothing to do with reducing emissions. It has to do with enriching people and companies who provided technology that’s commercially unviable.”

Ebell finds that the Paris Climate Agreement is not truly helping the environment or the U.S. economy.

“This international agreement unfairly bound our hands behind our back in our urgent contest with China, not to mention the agreement was regressive and hurt our society’s most vulnerable citizens the most. Any climate proposal that does not adequately address China’s problem with pollution is worthless and irresponsible,” Rep. Jim Banks (R-Ind.) said of the Paris Climate Agreement.

Grover Norquist, President of Americans for Tax Reform, said “The Obama Administration’s Paris Climate Accord promised to ship billions of taxpayer dollars overseas while killing jobs and raising energy costs here at home. Obama’s decision to handcuff our economy and commit ourselves to a less competitive United States was a foolish choice and the reason why Congress never approved of the agreement. The U.S. should officially exit the Paris agreement at the first available opportunity and continue its current path of energy dominance.”