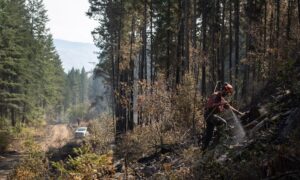 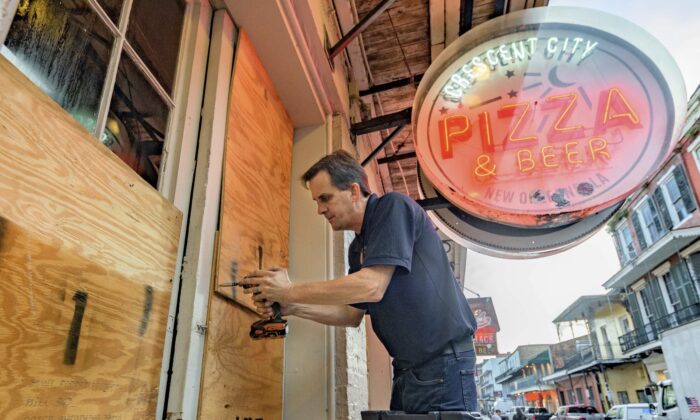 NEW ORLEANS—Weather forecasters warned residents along the northern Gulf of Mexico coast to rush preparations Saturday in anticipation of an intensifying Hurricane Ida, which is expected to bring winds as high as 130 mph, life-threatening storm surge, and flooding rain when it slams ashore in Louisiana on Sunday.

Highways on the northern Gulf Coast saw steady traffic as people moved to get out of the storm’s way. Trucks pulling saltwater fishing boats and campers were part of a steady stream of vehicles leaving the coast on Interstate 65 in south Alabama. Traffic snarls were reported on Interstate 10 heading west out of New Orleans.

Ida, a tropical depression two days earlier, was strengthening so quickly that New Orleans officials said there was no time to organize a mandatory evacuation of the city’s 390,000 residents, a task that means coordinating with the state and neighboring locales so that inbound lanes on highways can be converted to shunt traffic away from the city.

New Orleans Mayor LaToya Cantrell called a voluntary evacuation Friday and reiterated at a midday Saturday news conference that the time to safely leave was growing short. City officials also were preparing to announce facilities that would be opened to house anyone needing shelter after the storm. And they warned those who stayed to be prepared for prolonged power outages in the days to come, with sweltering heat.

Ida was poised to strike Louisiana 16 years to the day after Hurricane Katrina devastated the Mississippi and Louisiana coasts, causing levee breaches and catastrophic flooding in New Orleans, which took years to recover. Ramsey Green, the city’s top infrastructure official stressed that the levee and drainage systems protecting the city now are much improved. “This is a very different, protected city than it was 16 years ago,” Green said Saturday.

“That said, if we see 10 to 20 inches of rain over an abbreviated period of time, we will see flooding,” he said.

Residents and tourists were among those leaving Saturday.

“We were willing to wait it out but the hotel said we had to leave,” said visitor Lays Lafaurie of Fort Worth, Texas, waiting in a rental car line at the city’s airport. “They said we had to leave by 7 tomorrow morning. But if we’d waited that long there wouldn’t have been any cars left.”

Meteorologist Steve Bowen, head of global catastrophe insight at the risk and consulting firm Aon, said the area that was about to get hit is especially vulnerable, with large swaths of industries that could cause environmental damages as well as homes that still have tarps instead of roofs from multiple storms in 2020.

Phillips 66 said it was shutting down operations at its refinery in Belle Chasse, Louisiana, “based on the projected path of the storm and the potential for storm surge.”

Many gas stations in New Orleans and its suburbs were out of gas, and the few still open had lines more than a dozen cars deep and a wait time of nearly an hour.

Mike Laurent of Marrero, Louisiana, was filling up about a dozen gas canisters to fuel his generator and those belonging to friends and family. Laurent said he and his family will be riding out the storm at home despite concerns about the levee near his home being able to hold. It was reinforced after Hurricane Katrina in 2005.

“I don’t think it’s ever been tested like it’s going to be tested tomorrow or Monday,” he said. “I bought a dozen life jackets, just in case,” he said. “I hope I get to bring them back. I hope I don’t have to use them. But I’d rather have it and not need it than need it and not have it.”

Ida intensified rapidly Friday from a tropical storm to a hurricane with top winds of 80 mph as it crossed western Cuba.

By midday Saturday, Ida was centered 380 miles southeast of Houma, a city on Louisiana’s coast. It was traveling northwest at 16 mph, forecasters said. Its maximum sustained winds were 100 mph—Category 2 strength. And forecasters expected it to reach Category 4 strength before making landfall on the central Louisiana coast Sunday evening.

In New Orleans, city officials said residents need to be prepared for prolonged power outages and asked elderly residents to consider evacuating. Collin Arnold, the city’s emergency management director, said the city could be under high winds for about 10 hours.

Some ordinarily bustling businesses were closed Saturday. One popular breakfast spot was locked up tight with sandbags against the door to guard against flash floods.

Meteorologist Jeff Masters, who flew hurricane missions for the government and founded Weather Underground, said Ida is forecast to move through “the just absolute worst place for a hurricane.”

“It is forecast to track over the industrial corridor between Baton Rouge and New Orleans, which is one of the key infrastructure regions of the US, critical to the economy, there’s hundreds of major industry sites there, I mean petrochemical sites, three of the 15 largest ports in America a nuclear power plant,” Masters said. “You’re probably going to shut down the Mississippi River for barge traffic for multiple weeks. It’s gonna do a lot of damage to the infrastructure there.”

Ida’s storm surge may overtop some coastal levees that protect parts of New Orleans on the west bank of the Mississippi River, said Heath Jones, emergency manager of the Army Corps of Engineers’ New Orleans District. However, he said they are designed to be overtopped and have protections in place to prevent more damage. There does not appear to be any danger of storm surge coming over the levees that protect the city’s east bank, which makes up most of the city, he said.

A hurricane warning was issued for most of the Louisiana coast from Intracoastal City to the mouth of the Pearl River, including metropolitan New Orleans. A tropical storm warning was extended to the Alabama-Florida line. Warnings of dangerous storm surge stretched from south-central Louisiana to the Alabama state line and Mobile Bay in Alabama was under a storm surge watch.

President Joe Biden approved a federal emergency declaration for Louisiana ahead of the storm.

Additionally, the hurricane center said a new tropical depression formed early Saturday. It was centered 800 miles (1,285 kilometers) east of the Leeward Islands. It was expected to remain over the open Atlantic Ocean and posed no hazards to land.

By Rebecca Santana and Kevin McGill