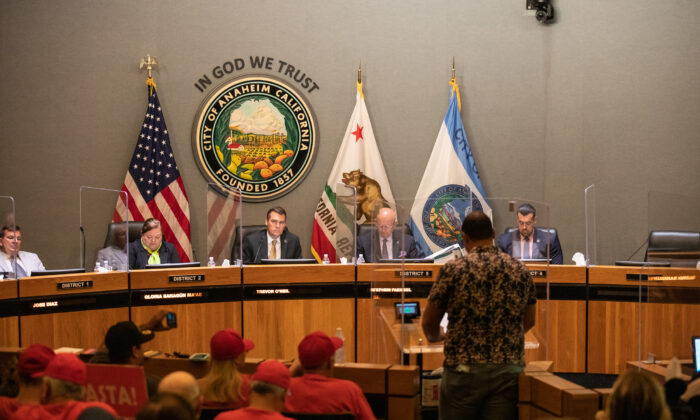 ANAHEIM, Calif.—Dozens of Orange County residents spoke out against crime at the city council meeting on Aug. 9 following the murder of a 17-year-old boy in the city last month.

The residents said more needs to be done to improve community safety after Juan Carlos Renayga, an Anaheim High School student, was shot and killed on July 8, leaving the community devastated.

Ron Flores, president of Basta—an organization founded in 2021 to encourage voter participation among minorities, especially Hispanics—and a dozen members were some of the residents that gathered at the meeting to call for more action by city officials.

“My family has been here 83 years, and it’s sad to see where we are,” Flores told the council.

Community members urged officials to address the city’s gang activity and fund more street lighting in places with higher crime, such as the Edison Park area.

Among those in attendance at the meeting was Soo Yoo, president of the ABC Unified School District’s Board of Education in Cerritos. While she didn’t speak to the city council, she agreed that crime is a big problem in Southern California.

Yoo—who is also running for the state Assembly district 67, which covers part of Riverside County in Southern California—said local police officers told her they are tired of risking their lives to arrest criminals who end up being quickly released.

A group of Anaheim residents and city officials also held a “flashlight walk” around the Edison Park area of the city on the evening of Aug. 5, taking note of sections that needed more lighting, law enforcement, or other city services.

While crime in Anaheim decreased by 17 percent from 2015 through 2019, the city had a higher crime rate than the county’s average in 2019, according to the city’s most recent data.