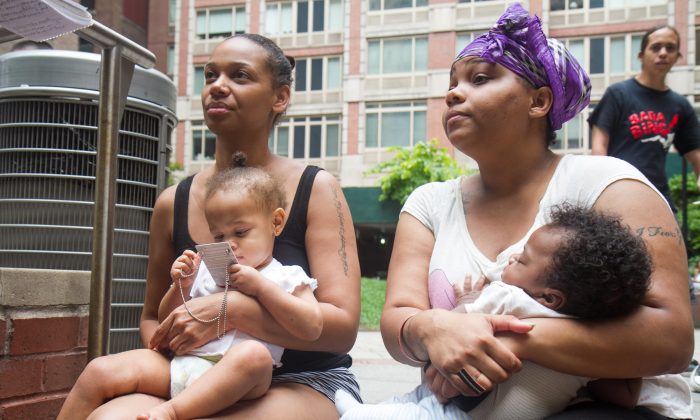 Tika Wilson (L) along with her friend who also lives in the homeless shelter at 4 E. 28th Street, wait outside in a plaza after a fire broke out in an apartment in the shelter, in Manhattan, on July 29, 2014. The building used to be the Hotel Latham which was later turned into a shelter. (Benjamin Chasteen/Epoch Times)
New York

NEW YORK—Hidden in plain sight in the middle of Manhattan on East 28th Street is a family homeless shelter which residents claim has conditions so decrepit they are desperate for help.

“They shouldn’t do this to people like us, honest, drug-free people,” said one female resident who says she is a victim of domestic violence and mother to an 8-month-old girl who is also in the shelter.

The woman, who asked her name be withheld for fear of retaliation from shelter staff, described a cockroach-infested room and food preparation space, constantly chipping paint in the bathtub where she bathes her daughter, and a crumbling bathroom floor with holes in it.

“I want to cry because I am trying to do everything I can to get out of this horrid shelter system,” she said. She’s not the only one with complaints.

Over the course of more than two weeks, Epoch Times has communicated with half a dozen other shelter residents in an attempt to establish a baseline description of conditions experienced by multiple, otherwise unconnected individuals. Their accounts are not only similar, but repetitive.


Mold on the walls. Mice in the rooms and their droppings on beds and next to the microwave. Cockroaches on the walls and in dressers. Bedbugs. Decaying plasterwork. Unhelpful and sometimes aggressive, threatening staff. Holes in the floors. Maintenance workers making unwanted sexual advances. Chipping paint. Unsanitary garbage rooms with overflowing trash. An often out-of-service elevator. No handicap access for strollers. Cigarette butts on the floor indoors. Mattresses that are falling apart.

“Everyone here has stories,” said 24-year-old Alexandra earlier this month. (Epoch Times has withheld Alexandra’s last name, and others at the shelter for their protection and privacy). She and her five-year-old child have been at the shelter for approximately 6 months. They are among the approximately 200 families currently residing there, the majority with at least one child.

One woman, Asia, claims that when she arrived at the shelter a few months ago, she was given a shocking option for her baby’s bed.

“When I first got here they gave me a crib full of roaches,” she said, adding that in her nearly five months on the premises she has never seen an exterminator. “They told me there was nothing that they can do about it.”

A resident who lives in the homeless shelter at East 28th Street in Manhattan, on July 29, 2014. (Benjamin Chasteen/Epoch Times)

The Department of Homeless Services (DHS), which oversees the shelter run by the operator CRF House East, LLC, said that facility is regularly inspected by both them and the provider. Also according to DHS, the property was inspected and found to be clean and in good condition as of August 14. CRF declined to comment and referred all questions to DHS.

According to CRF’s five-year, $40 million contract with the city, obtained through a Freedom of Information Law request by Epoch Times, the city pays $117 per occupied unit, per day. That’s at least $3,276 per person a month, which includes some cost for on-site services, typical of family shelters. The private leaser of the building, New Latham Hotel Corp., would not directly comment about the alleged conditions, though its lobbying firm James F. Capalino and Associates did confirm New Latham is the building owner.

The city’s homeless population is now at a record high of almost 55,000, according to DHS data as of August 13. Almost half of that population—a staggering 23,635—are children.

The building in question is a former hotel now used exclusively as a shelter, one of many like it throughout the city where homeless families are housed. As of data from October of last year, 17 percent of families with kids were housed in hotels and motels, according to a report published by the Coalition for the Homeless.

Even before it was a shelter, Latham Hotel got mixed visitor reviews on Yelp that are oddly similar to current complaints of shelter residents.

“I appreciated your affordable prices, reasonably friendly staff, and was willing to overlook the slight shabbiness,” wrote one woman named Sarah M. in a 2009 review, who detailed a horrible infestation of bedbugs in her room. “However, the chills I get when I think of our bodies covered in bedbugs gives me the heebee jeebees.”

Another review in 2010 indicates that some rooms were being used for residents, though the allegation could not be verified.

“Apparently the hotel is also an apartment for residents,” wrote Darina H. “Both the guests and residents share the elevator.”

The responses from elected officials about the complaints has been swift. The office of Public Advocate Letitia James is tentatively planning a site visit and is in the process of verifying complaints. The office of Council Member Rosie Mendez said they also plan to learn more about the conditions and do an on-site visit if possible.